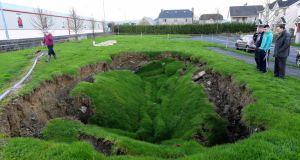 It is feared further collapse of the green area of the estate, which includes a creche, is likely. Photograph: Domnick Walsh/Eye Focus LTD.

A large part of the green area in a private housing estate in Castleisland town, in Co Kerry, was cordoned off after a sinkhole appeared early yesterday morning.

It is feared further collapse of the green area of the modern estate with a creche and other facilities on the Killarney Road is likely.

The hole measured 15 metres by six metres and emerged at the green area on the 90-house Cahereen Heights estate yesterday morning.

Local councillor Bobby O’Connell, who recently led a deputation of residents to a meeting of Kerry County Council about sewage concerns by locals, said the council must act immediately to call in a €1.5 million bond lodged with insurers.

The Fine Gael councillor said the sinkhole was a major health and safety risk and residents were very concerned.

“There are young families in these houses. People paid good money for these houses,” Cllr O’Connell said.

Kerry County Council has provided barriers and other equipment and is monitoring the collapses.