Shock and dismay at destruction of historic Vernon Mount in Cork 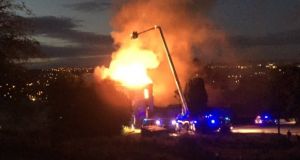 Emergency services attend the scene of the fire at Vernon Mount in Cork on Sunday night. Photograph: Brian McMahon via Twitter 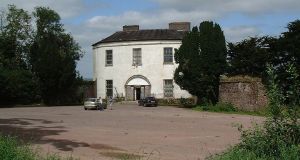 Heritage and conservation groups expressed their shock and dismay on Monday after a stately home on the outskirts of Cork city was destroyed in a fire which gardaí believe was started by a group of local teenagers.

AnTaisce and the Irish Georgian Society, along with the local Grange Frankfield Partnership in Cork, strongly condemned the burning of 18th century Vernon Mount in Douglas, which was destroyed, despite the best efforts of several units of Cork City and Cork County Fire Brigades to save it.

Garda technical experts carried out a forensic examination of the scene on Monday and investigators believe the inferno which destroyed the building began when a group of teenagers gained entry to the property and lit a bonfire within the house.

According to Charles Stanley-Smith of An Taisce, the organisation wrote to the owner of the house, US based developer Jonathon Moss earlier this month requesting he donate the house and 19 acres of parkland to Cork County Council so the council could secure it against further deterioration.

“The serious fire damage to Vernon Mount highlights the continuing failure of Irish planning legislation to enforce the maintenance of legally protected structures,” said An Taisce, adding that Cork County Council should seek a compulsory purchase order to save what is left of the house.

Meanwhile, it’s emerged that An Taisce wrote to Cork County Council only last month seeking the council to intervene to make safe the house after it received information from the Irish Georgian Society that teenagers were holding drink and drug parties in the historic house.

Donough Cahill, the Executive Director of The Irish Georgian Society, expressed dismay at the destruction of Vernon Mount which was built in 1784 and named after George Washington’s home, Mount Vernon, on the banks of the Potomac River in Fairfax County in Virginia.

“Vernon Mount is a protected structure of national importance whose endangerment has long been recognised by local, national and international organisations . . . Vernon Mount stood as possibly the finest surviving example in Ireland of a Georgian classical villa on the outskirts of a major city.

Describing Vernon Mount as “an architectural gem”, Mr Cahill went on to point out that “its significance was further enhanced by the presence of exceptional neo-Classical paintings of mythological subjects by Cork artist, Nathaniel Grogan which sadly are now lost forever”.

According to Ger Lehane of the local voluntary Grange Frankfield Partnership, the fact that some 200 years of Cork history was destroyed in a fire caused by vandals was all the more devastating in light of the fact that it appeared that the future was beginning to look bright for the 18th century house.

Cork County Council had carried out repairs to the roof of the building in 2012, after it had lain idle following the council’s refusal of planning permission to Mr Moss to develop it into a hotel and hopes were high the house would be incorporated into a local amenity plan for the area , he said.

“Grange Frankfield Partnership has worked over the last seven years with Cork local authorities, and with parties with an interest in providing for Douglas and Cork a public park of exceptional quality on the southside of the city with Vernon Mount House as a central focus,” said Mr Lehane.

Mr Lehane pointed out that the Grange Frankfield Partnership had worked with The Irish Georgian Society, Cork County Council and the US based Mount Vernon Institute to save the house but “all that remains now is the historical record and a memory of what might have been”.