Durrow auctioneer to become the centre of media attention in June 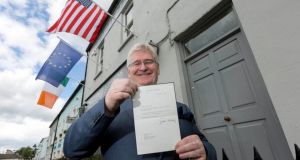 Sheppard’s Irish Auction House got a sneak preview yesterday of what is likely to befall Durrow in a month’s time.

“CBS News on the line, Mr Sheppard,” came a voice from reception as one of the two Mr Sheppards who run the business was explaining the Jacqueline Kennedy letters to RTÉ.

That call was hot on the heels of a similar one from the New York Times, the Washington Post and the New York Post. Email delivered fevered inquiries from Ilta-Sanomat newspaper of Helsinki as congratulatory texts flew in from auction clients in Beijing.

“They’re kind of shocked. They’re stunned,” was how Philip Sheppard (59) described the reaction of the callers from the United States.

No one knew much about the 33 deeply personal letters between Jacqueline and Fr Joseph Leonard that will sell at auction in Sheppard’s on June 10th, along with 21 associated items – 131 pages in all, and all but four of them in their original envelopes.

“This is a real, decent woman,” Philip says of the Jackie that emerges from the correspondence with Fr Leonard. “A woman who celebrates joyous moments and equally shares her dark moments also.”

First cousin and business partner Michael Sheppard (59) agrees: “She is totally consistent right through the 15-year period. Writing to Fr Leonard she is totally open, she’s talking to a true friend and her real personality comes through.”

Coy about vendor
Both are coy as to the vendor. Fr Leonard was a Vincentian priest, a scholar of St Vincent de Paul who taught in the order’s training school, St Mary’s University College, in London, and lived his latter years at All Hallows in Dublin.

The trove came to them early this year and they spent the intervening months researching and verifying its provenance.

“We are 100 per cent sure of the provenance here,” says Philip, who still has to pinch himself that he is playing a modest role in a family story that still arouses huge interest and emotion.

One of the most poignant lots for auction, one of the 21 associated items, so-called because they are not letters directly between Jacqueline and Fr Leonard, is a card the priest received for Christmas 1963. It was signed by the president and the first lady and was posted just before the assassination in Dallas – one of only 30 such jointly signed cards previously known to exist.

What Philip describes as “a phenomenal, incredible journey” will end on June 10th, when Michael’s hammer comes down. The estimated sale price is “€1 million and upwards”.

The Sheppard’s sales room will be full and Durrow’s well-maintained village green outside is likely to be festooned with mobile broadcast units and giant satellite dishes. But the big business may well be done by phone or online – the means by which this auction house in rural Ireland has achieved a global reach.