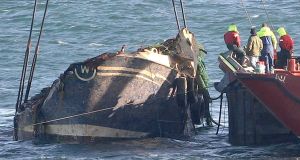 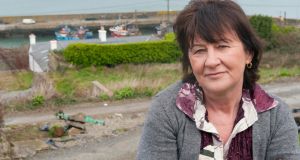 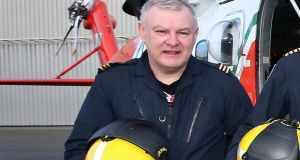 Julia Hennessy had met helicopter pilot Capt Dara Fitzpatrick before. The Irish Coast Guard captain was in charge of the Sikorsky S-92 for the commemorative flyovers above the memorial wall in Dunmore East, Co Waterford to her son Tomasin, brother-in-law Pat and other fishermen lost at sea.

“We used to wave and it would bring tears to your eyes,” she recalled from her home in the seafaring Maharees community near Castlegregory in Co Kerry. “You see how hard these people work.”

The two Hennessy men, Tomasin (30) and Pat (48), went down with three others, Pat Coady (27) from Wexford, Billy O’Connor (52) of Dunmore East and Andriy Dyrin (32), a Ukrainian man living in Waterford, when the Pere Charles trawler sank off Hook Head in Wexford on January 10th, 2007.

The boat, skippered by Tomasin, was heading back to Dunmore East with a haul of herring in a storm and heavy seas when contact with the trawler was lost shortly after 6pm. The men were never found. The trawler was raised 11 months later and brought to Arklow where it was searched. Julia Hennessy remembered sifting through “sludge-covered things” in the hope of finding their loved ones, describing the wrecked trawler as “such a lonesome sight”.

“It was just so sad raking over all those things in the hope you would find something. I don’t ever expect to find something at this stage,” she said.

It is 37 days since the Sikorsky Rescue 116 helicopter Capt Fitzpatrick (45) was flying with co-pilot Captain Mark Duffy (51) crashed into Blackrock Island off the Mayo coast. The bodies of the two pilots have been recovered but the search continues for the remaining two crew members, winchman Ciarán Smith (38) and winch operator Paul Ormsby (53).

Despite extensive searches, underwater surveys and the recovery of the wreckage, there is still no trace of them. Two men who searched for many others over the years are now the subject of a search.

“The first thing I thought of is, ‘God help us, another family having to go through that again’,” said Julia Hennessy.

Knowing where the helicopter crashed and the rising sea temperatures offer hope that their remains will appear but Ireland’s seas do not easily give up their dead. There is a long history of people being lost forever to the fierce currents or rocky reefs and crevices around the 3,171km coastline.

The Rescue 116 tragedy has brought Mrs Hennessy’s own tragedy starkly back to her, she said. Ten years on, she remembers the tireless efforts of the emergency services, volunteers combing the beaches, fishermen sleeping in boat wheelhouses so they could go back out to search as soon as they woke.

“I know exactly how those families feel,” she said. “The one thing that hit me in our case when it became a recovery rather than a rescue mission was how people down tools and gave us themselves.”

She has never given up hope that her son and brother-in-law will be found but the years have had eroded her sense of expectancy.

“One always hopes. If hope is gone, then what else is there? It would be absolutely amazing but one has to be a realist and plop one foot in front of the other and not get our hopes up,” she said.

Mary Doherty lost her son Terry (23) 12 years before Hennessy lost hers. He was one of six local fishermen on the Greencastle, Co Donegal-based Carrickatine trawler that sank without trace in a storm on November 15th, 1995. The longest search for fishermen’s bodies in the history of the State found no trace of the six men or the Carrickatine. It was so extensive that two uncharted German U-boats were found. The Carrickatine remains a mystery. One family lost two brothers; another a father and son. Relatives later dropped wreaths near the point of the trawler’s last reading.

“It was every day waiting for something to happen and something to come up and hoping that somebody would find something. It was just a continuous wait like these people off the helicopter,” said Mrs Doherty. “We could relate to those people very well. We know exactly what they are hoping for.”

Hearing Orla Smith, sister of the missing R116 winchman, telling reporters in Mayo that “we need those boys home now” brought back her family’s trauma when the Carrickatine disappeared. Mrs Doherty recalled her own daughter saying the same thing about her brother 22 years ago. “It just brings everything right back to you, right in front of you. You just relive everything again,” she said.

The loss of her son to the sea has brought no closure.

“There are days you think something is going to happen. It is never really gone. It is just in your mind because you don’t know where they are gone. You are out and think, ‘I might see my son’,” she said.

“We are reconciled now that we wouldn’t really expect to find him. I hope some day that we might find out happened to them. They are at rest now. That is their grave.”

Caitlin Uí Aodha waited 25 days in Union Hall in west Cork for the remains of her skipper husband Michael to be recovered after the sinking of the Tit Bonhomme trawler in January 2012. She described her state during those days as being “in a sort of limbo of hope that somehow something will change”.

“You know they are gone but that doesn’t really sink in. You are not really dealing with life. Day-to-day things don’t exist, even though you are doing them,” she said.

As chairwoman of the charity, Lost At Sea Tragedies (Last), Ms Uí Aodha has some understanding of the devastating losses felt by maritime tragedies. She knows of the heartbreak of women who have not recovered a husband or son and walk beaches for years searching or bury belongings in the family plot in the absence of their remains.

She disagreed with the decision to release the preliminary Air Accident Investigation Unit report that included a transcript from the cockpit voice recorder of R116 detailing the crew’s last moments.

“Do families actually need to see that amount of unfiltered, raw and difficult information when a search is going on?” she asked.

For her, Michael’s grave offers some closure, a place to visit on a Sunday or a birthday. “You are not closing the hurt and pain but what you are closing is the place where it is supposed to be,” she said.

Julia Hennessy said her family, in their grief, resort to black humour, calling it “grave envy” when they know a family who loses a loved one and has a grave to visit for a quiet moment of reflection.

“When you go to an ordinary family funeral, you can see the relatives have some kind of closure. Having a grave now is neither here nor there,” she said.

“What we will do is have a little monument put somewhere in the Maharees where people can sit and think for a while. It would be nice to have something to state their names and dates of birth on.”

“He felt like he was 10 feet high when he went out there. He was like a mighty hunter.

Surrounded by water on the Maharees, she looks at the sea differently now.

“I still look at the sea and see its beauty but I also know of its dangers and treachery,” she said.

Recovering bodies was what drove Tosh Lavery during his 30 years and two months diving in the Garda Sub Aqua Unit. He described the therapist term “ambiguous loss” as “big words” to explain what families he met are dealing with. To them, it is the not knowing that hurts, eating away like a cancer, he said.

“All I had in the back of mind was finding the bodies. To look at the person and to hand them over – it is like getting a result, bringing them back,” said Mr Lavery who continues to work on missing persons cases in his retirement.

“After a week of searches and you are sent home by the authorities for some reason or other, you feel desperate that you haven’t got a result. Desperate. I went back to many families. I could honestly say I went back to searches when I was in the guards on my days off.”

Some with long experience of searching still believe the bodies of the two remaining R116 crew will be found, despite the depth of the waters and the rocky terrain and the heavy gear the crewmen were wearing. John Leech, an 18-year naval diving veteran, found the body of a merchant seaman off the Cork coast in the 1980s 96 days after he went missing.

“We must be hopeful that they will appear,” said Leech, who is now chief executive of Irish Water Safety. “It could be as simple as a passing trawler or merchant ship or coast guard doing patrols in the area or volunteers working the coast line.”

Michael Loftus of the Gráinne Úaile Sub Aqua Club in Ballina, Co Mayo still watches out for the remains of Belmullet teenager Anthony Lavelle who was lost in 2001 when the boat he and his father were using to transport sheep to the island of Inishkea North, not far from Blackrock, capsized. His father survived. Loftus looks out for Lavelle when his club dives around nearby Eagle Island. It is part of the ethos of the sea-based communities that drives him, he said, that has kept him searching for people lost to Irish waters since 1983.

“If you ask me what it is all about: it is really to get the bodies back. Families are left devastated for the rest of their lives. It is such a sad, sad thing to lose somebody and not get them back, to look at the water and still think that their loved ones are still missing,” he said.

He is optimistic the two remaining R116 crew members will be found.

“We will never give hope and we will continue to search for the foreseeable future,” he said.