'The Irish Roar' by Seo Linn has been chosen as the Republic’s official Euro 2016 anthem. Video: FAI 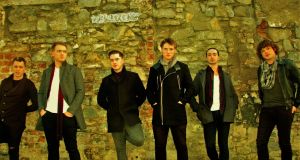 Seo Linn (above) were given the task of writing and recording a song for Euro 2016 after meeting FAI chief executive John Delaney on Easter Monday. The tune’s called The Irish Roar. File photograph: PA/PA Wire

The band behind Ireland’s song for the European Championships in France was commissioned to write it after a chance meeting just two months ago.

Seo Linn were given the task of writing and recording a song for Euro 2016 after meeting FAI chief executive John Delaney on Easter Monday.

Seo Linn were formed in Coláiste Lurgan in the Galway Gaeltacht three years ago. Their Irish language version of Avicci’s Wake Me Up has generated more than five million hits on YouTube.

They have also released Irish language versions of Macklemore’s Can’t Hold Us and Robin Thicke’s Blurred Lines, along with some original material.

They came to Mr Delaney’s attention after their performance at RTÉ’s Easter Rising musical commemoration Centenary concert, which was broadcast on television.

He was introduced to the band after the gig, and he immediately told them he believed they would be the perfect act for the Irish official song. He described their tune as “exciting and uplifting”.

The Irish Roar has been released just three weeks before Ireland’s first match against Sweden on June 13th. It begins with Óró, sé do bheatha ‘bhaile and ends with the late Bill O’Herlihy’s final sign-off in his last RTÉ broadcast.

There are nods in the song to some of the great moments in Irish soccer, most notably Packie Bonner’s penalty save against Romania and Shane Long’s winning goal against world champions Germany.

There is also a lowlight with Thierry Henry’s infamous handball and resulting French goal which ensured Ireland would not qualify for the World Cup in 2010.

Lead singer and co-writer with the band, Stiofán Ó Fearail, said he was shocked when he was asked to write the song. “I honestly could not believe what I was hearing, but John had absolute faith in us to come up with a song, which he said should be an uplifting piece for the team as they head to the European Championship tournament,” he recalled.

“This has been a dream come true for us, not just as musicians but as huge supporters of the Republic of Ireland football team.

“I want to thank John Delaney and the FAI for putting their trust in us and I hope we have given them and the team something that will be a fitting and perfect song for the tournament.

“For us this is unbelievable, to play some part in Irish sporting history, and to have our song heard by millions of Irish supporters around the world.”

The Irish Roar will be performed live for the first time by Seo Linn at next Friday’s Republic of Ireland ‘Three International’ friendly against Netherlands in the Aviva Stadium, the team’s last game at home before they travel to Fota Island Resort for a pre-tournament training camp, and onwards to Euro 2016.

It will be available to download through iTunes and Google Play from May 27th. Proceeds from sales of the song will go towards the John Giles Foundation and the Capuchin Day Centre.