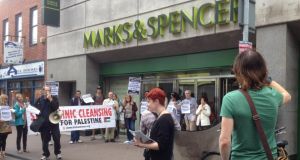 People demonstrated inside and outside the Marks and Spencer store on Mary Street, urging shoppers to boycott Israeli goods. Photograph: Erin McGuire 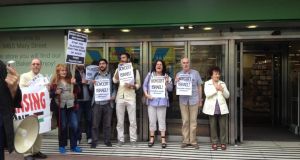 The demonstration was organised by the Irish Anti-War Movement, the Socialist Workers Party and People Before Profit. Photograph: Erin McGuire

Gardaí were called to a Dublin city centre supermarket where proponents of a boycott of Israeli consumer goods demonstrated in the middle of the shop.

Protestors both inside and outside the Marks and Spencer store on Mary Street encouraged shoppers to boycott Israeli goods, while gardaí stood outside.

The demonstrators filled several shopping trollies with Israeli goods and produce including fruit, vegetables and wine, and took over the checkout area to deliver speeches.

The protest, which began at the spire on O’Connell Street, progressed to Smyths toy store on Jervis Street where three security guards blocked the store’s entrance. Demonstrators stood outside chanting “boycott Israeli toys”.

On Sunday staff at Smyths posted and quickly removed a sign stating that Israeli products had been removed from its shelves.

Three gardaí followed behind the crowd of several dozen protestors as they marched to shops that sell Israeli products.

The demonstration was organised by the Irish Anti-War Movement, the Socialist Workers Party and People Before Profit. The groups seek a national boycott of Israeli-made goods, in an effort intended to mirror the boycott of South African goods during apartheid.

“South African was an apartheid state, and so is Israel. Palestinians are being excluded. We want to isolate and economically hurt Israel and make people aware they can make a difference by boycotting [ISRAELI GOODS],” said Madeline Johansson of the Socialist Workers Party.

It is also an academic and cultural boycott, and organisers encourage Irish academics and students not to go to Israeli universities, and for Irish musicians to cancel gigs in Israel.

Patricia O’Leary of People Before Profit said it is inappropriate for stores to support Israel by continuing to sell goods made in the country.

“The mass slaughter of a particular race of people is unacceptable. I won’t purchase Israeli products for the rest of my life,” she said.

A statement released by the Socialist Workers Party said: “Israel’s despicable assault on Gaza is now on momentary pause. The Palestinian death toll now stands at almost 2,000 with more than 8,000 injured.”

The group is calling on the Irish Congress of Trade Unions to encourage its members to join the boycott.

The Exchequer Bar in Dublin and the entire village of Kinvara, Co Galway have already begun boycotting Israeli goods.