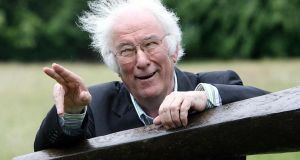 Seamus Heaney, who died last month: Up to 12 writers will read from his works in sequence to mark the fact that the Nobel laureate was “such a great friend” of the Clifden Community Arts Festival, according to its director Brendan Flynn.

Poets and artists will participate in an “intimate remembrance service” tomorrow for the late Seamus Heaney as part of this year’s Clifden Community Arts Festival.

Up to 12 writers will read from Heaney’s works in sequence to mark the fact that the Nobel laureate was “such a great friend” of the Connemara arts event, according to its director Brendan Flynn.

Harps and pipes
Clifden Community School student Andrew Ormsby will read Heaney’s Mid-Term Break, while artist Joe Boske will exhibit a drawing of the late poet. Harps and pipes will be played by Kathleen Loughnane and Fiachra O’Regan.

The remembrance service at 11am tomorrow in the Clifden Stationhouse Theatre marks the first weekend of the 36th annual festival, opened last night by Druid Theatre artistic director Garry Hynes. Ms Hynes said Clifden “ always had a very special place in my heart ever since Druid first came to the festival 30 years ago”. She noted that Mr Flynn and his team had “excelled themselves once again” with a programme “bursting with more and more highlights and unmissable events”.

French-Creole, rock, traditional and classical music, including a performance of Handel’s Messiah, and a public interview by former RTÉ broadcaster Mike Murphy with Riverdance composer Bill Whelan, are among the highlights over the next nine days to September 29th.

The Guinness Choir will perform the Messiah, and British poet laureate Carol Ann Duffy will read with musician and actor John Sampson. Author and journalist Kevin Myers will give a lecture on “Commemorations: Ireland’s Fatal Addictions”, and Fishamble: The New Theatre Company will stage one-man plays Silent and Forgotten with dramatist Pat Kinevane.

Dance, music, fire and costume are promised on September 28th for the festival’s “finale parade” led by LuXe processional and landscape theatre company and with Rob Strong and Band.

A full programme of events and tickets can be found online at clifdenartsweek.ie