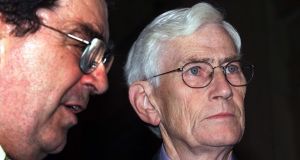 The death has occurred of Gertrude Mallon, wife of the former deputy SDLP leader and Deputy First Minister Seamus Mallon. SDLP leader Colum Eastwood described her as “pillar of strength and a source of hope for SDLP during the darkest days” of the Troubles.

Ms Mallon had been ill for some years and was cared for by her husband at their home in Markethill in Co Armagh.

Ms Mallon, née Cush, was a nurse who late in her life developed dementia.

She is survived by Mr Mallon and their daughter Orla, son-in-law Mark and granddaughter Lara.

In an interview with The Irish Times in December, Mr Mallon spoke fondly of his wife and how in the difficult early days of his political career it was her support and indeed her earnings as a nurse that allowed him to keep active in the SDLP.

Mr Mallon cared for his wife at their home with daily support from care staff.

In that interview he reflected on how former SDLP leader John Hume now suffers from dementia. “I have great sympathy for him. I have known for some time the nature of his illness. I know what it is like. My wife has the same illness. It’s tragic to see a man of his ability not being able to function,” he said.

SDLP leader Colum Eastwood said Gertrude “was a life-long SDLP member who stood against violence alongside her husband Seamus from the early days of conflict”.

“Gertrude will long be remembered as a pillar of strength and a source of hope for SDLP members in Armagh during the darkest days of conflict, none more so than her devoted and beloved husband Seamus.

“Close family members of politicians often bear the greatest burden. And given Seamus’s towering political stature and fierce opposition to violence in south Armagh, Gertrude and their children had a lot to bear,” said Mr Eastwood.

“But it was her strength in the face of such visceral opposition, her unyielding commitment to peace and her unconditional support for Seamus that contributed as much to our political process as any negotiator.”

In a statement on behalf of John Hume the former SDLP leader said that “Gertrude Mallon was the beating heart of the SDLP in South Armagh” and “a tower of support to Seamus”.

“Her contribution to peace, politics and people across this island is immeasurable,” added Mr Hume. “It’s often those closest to politicians who are forced to endure the most in difficult times. Gertrude’s caring nature from her background in nursing stood her in good stead as she looked after not only her own family but all those who needed support as the horrors of that time unfolded.”

SDLP Assembly member for Newry and Armagh Justin McNulty said “Gertrude made an outstanding contribution in her chosen profession of nursing and was a rock to her husband, Seamus, through the most difficult days of the Troubles here. She was a woman of courage who did not flinch even in the face of bomb and bullet. She will be sorely missed by Seamus and Orla and by all who loved and knew her.”