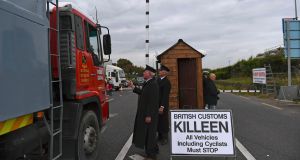 About 150 protesters gathered at the Border between Belcoo in Co Fermanagh and Blacklion in Co Cavan in opposition to the United Kingdom’s decision to leave the European Union.

Farmers, business people and local politicians joined other members of the new campaign group “Border Communities Against Brexit” in the first protest of its kind in the area, which took place on Saturday.

In an address to the assembled crowd a few short steps from Belcoo, farmer John Sheridan from the village of Florencecourt in Fermanagh criticised those in the UK government who backed Brexit.

“They want us to go on the road to nowhere with them, that could actually be the road to hell as far as I am concerned,” he said.

“This will leave six counties in complete isolation leading to a complete lack of investment as the younger generation move away to find themselves a life. God help us in two or three years.”