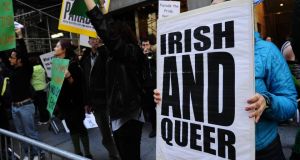 A file photograph of gay activist displaying signs along the St Patrick’s Day parade route in New York in protest at being excluded from the annual event. Photograph: Emmanuel Dunand/AFP/Getty Images.

John Lahey, president of Quinnipiac University in Connecticut, was elected chairman of St Patrick’s Day Parade Inc, the non-profit organisation that owns and manages the Fifth Avenue parade in Manhattan, at a meeting of its board of directors earlier this week.

His election, along with that of fellow parade organiser, businessman John Fitzsimons, as vice chairman, means that the two men will be in charge of organising next year’s parade.

Mr Dunleavy will remain on as chairman of the lower-ranking St Patrick’s Day Parade Committee that represents 200 affiliated groups that march every year. The newly created roles for Dr Lahey and Mr Fitzsimmons means that they are now in charge of the parade, representing the board of the company behind it.

The personnel changes behind the parade - first reported by news website Irish Central - follows public comments made by Mr Dunleavy in the past two months in which he said that openly gay groups would “have a problem” gaining admittance to next year’s parade.

Mr Dunleavy had also been offering the rights to televise the parade to networks other than its long-time broadcasting partner, NBC.

The parade organisers this year ended a 20-year ban on openly gay groups marching in the popular parade by allowing NBC’s gay, bisexual and transgender group, Out@NBCUniversal, to participate.

He said he was voted chairman by the board of directors of the legal entity responsible for all aspects of the parade to prevent confusion about Mr Dunleavy’s role and the public comments he was making.

“Some people in the general public may think that he is the chairman,” he said. “We hope that this will provide clarification.”

Dr Lahey said he had been asked by the board to contact several gay groups who sought to march this year as the organisers plan to permit a second openly gay group to participate in the 2016 parade.

He has also been asked to renegotiate the television rights with NBC to broadcast next year’s parade.