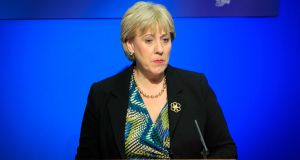 Minister for Arts, Heritage and the Gaeltacht Heather Humphreys has revealed that her grandfather signed the Ulster Covenant. File photograph: Gareth Chaney/Collins

Minister for Arts, Heritage and the Gaeltacht Heather Humphreys has revealed that her grandfather signed the Ulster Covenant in 1912.

Robert James Stewart, a member of the Presbyterian church in Drum, Co Monaghan, was just 19-years-old when he signed the covenant.

He was one of an estimated 12,000 Monaghan men who signed the Ulster Covenant, the highest number from any county in what is now the Republic.

One-quarter of the population of the county was Protestant before Irish independence.

Speaking at an event on the Easter Rising hosted by the Presbyterian church in Belfast, Ms Humphreys said that her grandfather would not imagine “in his wildest dreams” that his only granddaughter would serve as a minister in the Government with responsibility for commemorations.

Ms Humphreys said that she wished the “Protestant story on this island could be fully explored” during this decade of centenaries.

She said it was time for southern Protestants whose families were affected by events between 1916 and 1922 to come forward and tell their stories.

The Protestant population of the Irish Free State declined substantially after independence, which some historians have said was due to republican violence.

Other historians believe it was a result of a lack of economic opportunity in the state.

The Minister said she is a republican and that in its purest form the movement’s principles are the same as those of the Presbyterian church of which she is also a member.

“Republicanism is simply the right for everyone to have their say and the right to choose those who represent us.”

She said its core principle, that all lives are equal, is at the heart of the Ireland 2016 programme and will be included in the memorial wall to be erected in Glasnevin Cemetery listing the names of all those who died during the Rising.

She also said that the Government will host a State event in Grangegorman Cemetery to remember all the British soldiers who died in the Rising.