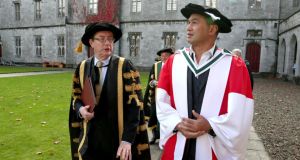 Connacht Rugby head coach Pat Lam has said he was “distraught” to learn of the sudden death of Anthony Foley in Paris at the weekend.

“He was an extremely good friend and I’m still in shock at what happened to him,” Mr Lam said, speaking before he was awarded an honorary doctorate at NUI Galway on Monday.

The New Zealand-born rugby coach of Samoan descent admitted to mixed feelings about the degree conferring, as he said that it was with a “heavy heart” he remembered a great competitor and friend.

“Our thoughts go to Olive his wife and the kids,” he said, describing the Munster head coach as a “special man” who he had marked when playing with Northampton.

“I was only talking to him last week and wishing him all the best with the European adventure,” Lam said.

Lam recalled the first time that they had met, when he was captain of Northampton and playing against Foley’s Munster team in the final of the Heineken Cup in 2000.

“We won 9-8 but we marked each other,” Lam said. “Straight afterwards we acknowledged it and that friendship lasted right up until this day. We stayed in touch often and encouraged each other.”

When Connacht “got off to a rocky start”, Foley was the first one to text him with a supporting message.

He described Foley as a “legend in world rugby” who commanded respect from everyone who met him. “I was just blessed to know him well.”

Lam said rugby was only a “small part” of life which he described as “a journey . . . about learning as much as you can, influencing people and building relationships.

“Education translates to rugby, it starts with the heart, the heart sets a dream, has a vision but then the hard work needs to happen,” he said.