Luas strike: What are the demands of employees?

Annual leave, overtime and pensions are among the issues behind industrial action 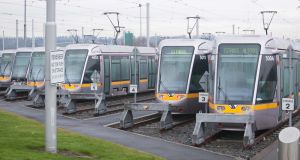 Leave: New Luas workers would get five days extra annual leave, bringing their entitlement to 25 days, if their current demands are met.

Workers who have been with the company between three and 10 years would receive an additional four days, entitling them to either 25 or 26 days depending on grade.

Workers with more than 10 years’ service would get an extra three days, bringing their total to 27 days.

Good Friday would be a paid day off. Employees who adopt children less than six months old would, if their demands are met, be entitled to the same benefits as under existing maternity details.

Bereavement leave would also be extended, going from five to 10 days if a spouse/partner or child dies, and from three to five days if a parent dies.

The costs of the leave proposals amounts to €1.2 million.

Overtime: demands include double-pay instead of time-and-a-half for working a Saturday rest day.

If a driver agrees to transfer between Red Cow and Sandyford depot they will receive the inter-depot transfer rate of €100.

Death in service: Partners or spouses of drivers who die in service would receive a lump sum benefit of five times the driver’s basic annual salary instead of three times their salary, as is currently the case.

The estimated additional cost of this is €350,000 over the five years of contract.

Pensions: On pensions, employees with 10 years of service would receive a full 10 per cent contribution from their employer.

Currently employees contribute 5 per cent of their salary, with the company contributing 5 per cent too.

The estimated additional cost of these proposals is €2 million over the five years of contract.

Other: Drivers would receive a free GP service, reduced maximum rostered drive time and increased sick-pay benefits (up to seven weeks paid in full, with half-pay for the following six months and then income protection of half-pay until retirement or return to work).