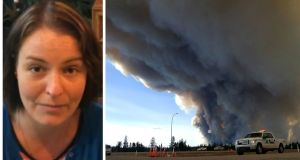 Orla Healy, from Newbridge, Co Kildare, had to leave her home in Fort McMurray on Tuesday along with the city’s 88,000 inhabitants.

An Irish woman living in Canada has described being forced to evacuate her home due to a wildfire as the “scariest experience” of her life.

Orla Healy from Newbridge, Co Kildare had to leave her home in Fort McMurray on Tuesday along with the city’s 88,000 inhabitants.

“It was the scariest experience of my life without a shadow of a doubt, to effectively try and pack up your life.

“To hit the road and see the flames coming after you, that’s pretty scary.”

Canadian officials showed some optimism for the first time on Sunday that they were beginning to get on top of the country’s most destructive wildfire in recent memory, as favourable weather helped firefighters and winds took the flames southeast, away from oil sands boomtown Fort McMurray.

There was still no timeline, however, for getting Fort McMurray’s 88,000 inhabitants back into what remains of their town.

Speaking on RTE’s Morning Ireland Ms Healy said they had left their home in Fort McMurray on Tuesday and she and her partner were now in Edmonton.

“We were told you’d better come home, as certain areas of town were under mandatory evacuation. Our area was not, but it was being watched because of the potential of having fire outbreaks.

“We rushed home, packed about three days worth of clothes, got passports, packed up food for the pets, and we made the break to try to leave town at that stage, unfortunately fire had broken across Highway 63 and had cut off our route south of town to go to Edmonton.

“We were in same boat as a lot of people, about 25,000 of us, the only way we could go was north. We just hit the road, bumper to bumper. We tried to find a work camp to put a roof over our head for the night.”

She said that they have a security system on their house, so they had been able to log in and could see that their house was still standing.

“The neighbourhood is in the downtown core, near the hospital. A lot of work was done in that area to protect the infrastructure, so we were quite lucky in the location of our house.

“The firefighters put on a great display, they fought for our city. We just happened to be in that locality. That’s part of the reason why we still have a house.

“Two neighbourhoods that were destroyed were literally just up the hill from us. We could see the fire coming down the hill to our house.

“Thank God we still have a roof over our head. What state it is in we don’t know or when we will get back. We’re all in limbo. We don’t know what’s going on.

“We were at the Irish Club in Edmonton today. Some of the Irish guys that work with a construction company in Fort McMurray got a call to go back to try and assess damage.”

The wildfire which has scorched through Canada’s oil sands region in northeast Alberta since last Sunday night had been expected to double in size on Sunday, threatening the neighbouring province of Saskatchewan.

But with the fire moving into its second week, light rains and cooler temperatures helped hold it back, giving officials hope that they can soon begin assessing the damage to Fort McMurray, close to where the fire started.

Officials said it was too early to put a timeline on getting people back into the town safely.

Alberta’s government estimated on Sunday that the fire had consumed 395,000 acres.

Fort McMurray is the centre of Canada’s oil sands region. About half of the crude output from the sands, or one million barrels per day, has been taken offline, according to a Reuters estimate.

The inferno looks set to become the costliest natural disaster in Canada’s history. One analyst estimated insurance losses could exceed CAN $9 billion.