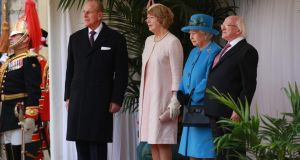 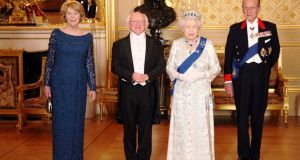 Yesterday’s engagements at Windsor Castle and Westminster highlighted the sartorial choices of President Michael D Higgins and his wife Sabina on the first day of their state visit.

The events threw an international spotlight on Irish fashion. The simple lines and colour of the pink, pearl studded Linton silk coat and dress by Louise Kennedy worn by Mrs Higgins to meet the queen were well chosen, the tilted fan chapeau by Philip Treacy adding a cocky, lighthearted touch.

It complemented the queen’s sky blue cashmere ensemble by Stewart Parvin with a hat decorated with hand cut Waterford crystals, diamonds and gold fashioned by her longstanding dresser of Irish descent, Angela Kelly. Such details indicate the thought that goes into dressing for such occasions.

As for Mr Higgins, his classic suits were made by Irish tailors Michael Johnson from Tullow and Declan Abrahams in Dublin, though whether or not his Windsor knot was a political reference to the style’s royal origins is open to debate.

Michael Johnson is one of Ireland’s longest-established tailors whose family tradition goes back to 1867. For the visit, he made two suits in dark and mid -grey tweed as well as a coat in dark grey herringbone. Declan Abrahams’s brief was two black suits, one with mother of pearl buttons, a plain navy suit and a three-piece in charcoal grey light wool.


State banquets
With the exception of the ballgowns for the two state banquets, nearly all of Mrs Higgins’s wardrobe, some 14 outfits in all for the four day period, have been purchased off the shelf from about a dozen Irish fashion and accessory designers. “It was not my intention to commission a special wardrobe, but to show Irish women what was on offer out there,” said Joan Bergin, the Emmy award winning costume designer who guides Mrs Higgins’s choices. The first seen on the visit was a dark green wool dress and coat from Helen McAlinden’s winter collection, worn with a feathered hat by Nessa Cronin, owner of Mad Hatter. The fascinator may have perfectly suited the ensemble but was perhaps not the most practical for a debut on to a windy tarmac.

At last night’s state banquet, Mrs Higgins made another elegant entrance in a Kennedy floor length, long sleeved gown in blue/green Guipure lace embellished with green and blue crystals adding the requisite sparkle for such formal white tie occasions. The dress’s lace was by Sophie Hallette the famous French lacemakers whose origins go back to 1887 and who made the lace for Kate Middleton’s wedding. It was worn with a “riviere” necklace of diamond clusters with sapphire and diamond drop earrings designed and made by jeweller John Farrington.