Halawa sisters to be released from Egyptian jail 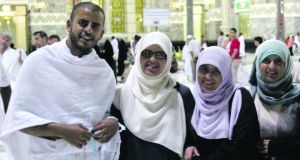 Three Irish citizens jailed without charge in Egypt during clashes between supporters of ousted president Mohammed Morsi and security forces are to be released today, the Tánaiste has said.

Minister for Foreign Affairs Eamon Gilmore said three Halawa siblings, sisters Omaima, Fatima, and Somaia, who were detained in August after they took refuge in Cairo’s Al Fateh mosque during the violence were to be released.

Their brother Ibrahim remains in custody and is due to attend a further hearing on Saturday.

Another sibling Nosayba Halawa, who remains in Dublin, said her sisters had not yet been freed.

Mr Gilmore said he phoned Egypt’s foreign minister Nabil Fahmy on Monday to express concern that the Halawas had been kept in prison for almost three months without being charged with an offence.

“I also expressed the Government’s hope and expectation that the situation would be brought to a satisfactory conclusion in the near future,” he said in a statement.

Mr Gilmore said his department would continue to provide consular assistance to Ibrahim Halawa and “liaise with the Egyptian authorities on his ongoing detention without charge.”

The Halawa siblings have been in custody since August 17th when they were rounded up with scores of others after a stand-off between security forces and supporters of Mr Morsi at Cairo’s Al Fateh mosque. They were subsequently jailed in Tora prison.

Speaking on RTE Radio One this afternoon their sister Khadija Halawa said that she expected her sisters to be released this evening.

“We were at the court today. They gave us the last decision of the girls being released. Of course they’re not out yet. They said they will be out maybe tonight or maybe tomorrow but the decision was taken for them to be released - only the three girls,” she said.

Speaking about her brother Ibrahim Ms Halawa said he might be held for another 45 days but that a final decision would be taken on Saturday when he attends a further hearing in Cairo.