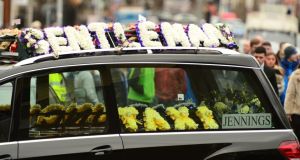 The funeral of Eddie Hutch at the Church of Our Lady of Lourdes on Sean McDermott Street in Dublin. Photograph: Cyril Byrne

The funeral of murdered taxi driver Eddie Hutch passed off without incident yesterday, as expected, with the Garda operation more low-key than that at the first Dublin gun-feud funeral of the week.

The dead man’s brother, Gerry Hutch, the criminal who is also known as The Monk, was in attendance.

However, he wore a cap and what appeared to be a grey wig in an effort to conceal his identity from the large number of press photographers and TV cameras covering proceedings. Gerry Hutch, who is under threat from the same men who murdered his brother, did not openly mingle with other family members in public at any time, with many unaware of his presence until photographs emerged of him later in the day.

Seán MacDermott Street in Dublin’s north inner city was closed to traffic for hours as part of the security arrangements in place around Eddie Hutch’s funeral Mass at 11am yesterday at Our Lady of Lourdes Church.

The Public Order Unit was also on standby a distance away but was not visible to the estimated 800 mourners.

Ahead of the funeral, the Garda Dog Unit was used to sweep the area around the church to ensure no explosive devices had been hidden, although those checks were done as a precautionary measure only.

The Garda helicopter was also visible in the sky. It later followed the cortege to Glasnevin Cemetery as did members of the ERU in a number of vehicles.

The policing operation was not as significant nor the atmosphere as intense as that at the funeral of David Byrne (33), from Crumlin, in Francis Street, Dublin 8, and Mount Jerome Cemetery, Harold’s Cross, on Monday.

A member of a major drug gang led from Spain by Dubliner Christy Kinahan, Byrne was shot dead when five gunmen attacked a boxing tournament weigh-in he was attending at the Regency Hotel, Drumcondra, on Friday, February 5th.

That attack was in retaliation for the shooting dead by the gang of Dublin armed robber and drug dealer Gary Hutch (34) in Spain last September.

The Regency Hotel attack is believed to have been carried out by associates of Gary Hutch. And when members of the Kinahan gang wanted to strike back at those who carried out the Regency attack, they went to the home of Gary Hutch’s uncle Eddie Hutch on Poplar Row, Dublin 3, last Monday week and shot him dead, despite the fact he had no involvement in organised crime.

Climate crisis: 2020 set to be ‘one of hottest years’ on record 14:45
Treatment of elderly during Covid-19 ‘not far short of a disgrace’ says C of I Primate 14:42
Taoiseach says preparation work for Covid-19 vaccine ‘proceeding at pace’ 14:07
Covid-19: Dublin street traders and council reach deal for run-up to Christmas 13:46
Driving test wait times more than quadruple due to first Covid-19 lockdown 13:29