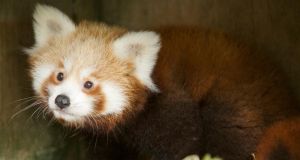 Fota Wildlife Park in Cork has chosen a strong Irish name for its most recent arrival, a baby Red Panda Cub – named Dearg.

Dearg was born in June in the park and members of the public were invited to suggest possible names for the three-month-old, whose gender has yet to be determined.

Head of Marketing at Fota Wildlife Park, Stephen Ryan, said Dearg was only the second Red Panda to be born in the park in 21 years, making the cub a significant new arrival at the park.

“The opportunity to name the cub seemed to be a big hit, with suggestions coming in from all over the world including many from the US, UK and even as far as New Zealand, ” he said

“In the end, we narrowed it down to three of the most popular names suggested, which included Dearg, Rusty and Rebel, with the wardens looking after the cub opting for Dearg.”

Dearg is the first cub for mother, three-year-old Bonnie, who originally came from Dublin Zoo, and father Pete who is five years old, revealed Mr Ryan.

The Red Panda is native to the Himalayas in Bhutan, southern China, Pakistan, India, Laos, Nepal, and Burma, but it is believed that less than 2,500 remain in the wild, he explained.

And to help stop their decline, Fota contributes to the European Endangered Species Programme Forest Guardian Project to protect Red Pandas in an area in Nepal.

They live in the slopes of the south of the Himalayas and the mountainous forests southwest of China, at altitudes of up to 4,800 metres, and generally do not venture below 1,800 metres.

And they live predominantly in trees and are very acrobatic and have a dense fur coat which helps them to survive the cold winter months of its high altitude habitat, said Mr Ryan.