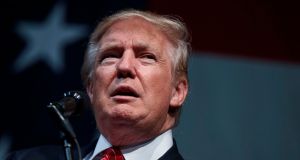 Volatile markets mean companies in Ireland have struggled to make money on their pension investments, meaning the pensions “hole” at the country’s largest companies has almost doubled in the first seven months of the year.

Republican presidential candidate Donald Trump is the source of further controversy after he said US second amendment supporters – gun rights advocates - could figure out a way to stop Democratic candidate Hillary Clinton from introducing controls on firearms.

The Government will lend its support to a fresh legal application for the release from prison of Ibrahim Halawa, the young Irish man who has been detained in Egypt for three years.

Dealz or no Dealz

Discount retailer Dealz is to take over the premises on Dublin’s Liffey Street that housed the Epicurean Food Hall until the food hall’s closure earlier this year. A local business grounp said the new outlet would do well but that the area also needs more independent shops and restaurants.

Free the nipple? Not so fast, says Kathy Sheridan.