FF and SDLP attack SF over North-South stance on austerity 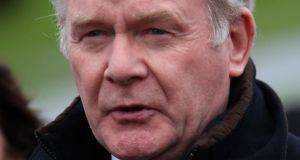 Fianna Fáil and the SDLP have accused Sinn Féin of opposing austerity in the South but supporting it in the North, as the consideration stage of the welfare reform bill passes through the Northern Assembly.

Sinn Féin opposition to British government welfare changes was the issue that almost brought down the Northern Executive and Assembly.

The matter was resolved just before Christmas when Sinn Féin said it would agree to welfare reform based on commitments that additional money would be provided to cushion the worst affects of welfare change.

Sinn Féin leaders including Gerry Adams and Martin McGuinness were conscious their opponents in the Republic and Northern Ireland would seek to exploit the issue, and so it has proved with Fianna Fáil TD Niall Collins and SDLP leader Dr Alasdair McDonnell attacking the party on welfare reform.

The debate taking place over Tuesday and Wednesday has been ill-tempered after the DUP used petitions of concern - an effective veto in the Assembly - to block about 50 amendments to the bill.

Ulster Unionist Party MLA Roy Beggs accused the DUP of shamefully “killing off discussion” of the bill while SDLP MLA Alex Attwood claimed the DUP was trying to run a “coach and horses” through the amendments.

“The SDLP dissidents are clearly now in charge of the party and are prepared to risk the collapse of the Stormont House Agreement - and thereby the power-sharing institutions themselves - for the sake of party political grandstanding,” he said.

DUP First Minister Peter Robinson defended the blocking of the amendments saying that without the agreement on welfare reform the Northern Executive and Assembly would have collapsed. He added that members could not have an “a la carte” approach to the Stormont House Agreement.

That did not stop Fianna Fáil and the SDLP seizing the opportunity to castigate Sinn Féin.

Fianna Fáil TD Mr Collins in a statement said that the current debate would lead to the introduction of “Tory welfare cuts to Northern Ireland”.

“Sinn Féin has stated its support for the bill which to date includes sweeping cuts to social welfare supports in Northern Ireland with no alleviating measures. They have not put forward any amendments to the bill,” he said.

Mr Collins said the “bill shows up the sheer hypocrisy of Sinn Féin on both sides of the Border”.

“The cuts to welfare in Northern Ireland flies in the face of what they have been calling for in the Republic. They haven’t even put forward amendments to the welfare bill before the Assembly.

“Estimates range from £130 million to £290 million per annum being cut from the welfare support in Northern Ireland. The proposed £70 million in alleviating funds has yet to be agreed,” he added.

SDLP leader Dr McDonnell said that Mr McGuinness, Mr Adams and Sinn Fein were rattled over welfare reform and also on issues such as its continued opposition to the British National Crime Agency, which the SDLP last week decided to endorse.

“On the one hand, Gerry Adams announces that he wants to lead an anti-austerity government in the South, while Martin McGuinness tells us an austerity budget in the North is ‘the best deal possible’,” he said.

Dr McDonnell added: “Sinn Féin knows that the ground is slipping under them. The SDLP led on the National Crime Agency. The SDLP led on and opposed the budget. On welfare, the SDLP continues to hold the line for social justice and a fairer deal for those in need. Yet Sinn Féin baulked on the NCA, accepted an austerity budget and seeks to hide behind the DUP and their petitions of concern on key aspects of welfare reform.”