Service marks centenary of ‘The Last General Absolution of the Munsters’

The incident surrounding a famous Irish painting of the First World War is remembered in France. Video: Ronan McGreevy 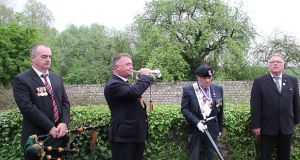 A memorial marking the exact location which inspired war artist Fortunino Matania’s famous painting The Last General Absolution of the Munsters at Rue du Bois has been unveiled.

The mayor of the commune of Richebourg Gérard Delahaye and members of the Royal Munster Fusiliers Association attended the service on the Rue du Bois a long road near Bethune in the Pas-de-Calais.

The road was parallel to the British frontlines during the Battle of Aubers Ridge which occurred 100 years ago on Saturday. The battle cost the British Army 11,000 casualties without any breakthrough.

Before going into battle, the Dublin diocesan priest Fr Francis Gleeson gave the Munsters last general absolution at what was then the remains of a church which was destroyed by shelling.

The author Jessie Rickard, whose husband the battalion commander Lieutenant Colonel Victor Rickard was killed in the Battle of Aubers Ridge, wrote an account of the general absolution which was then converted into a painting by Matania, a war artist employed by The Sphere magazine.

Speaking at the unveiling, the Royal Munsters Fusiliers Association chairman Liam Nolan said Matania’s painting had “assumed an iconic status due to its evocative nature and the tragedy of the following day”.

He also paint tribute to local man Michel Knockaert who spent many years trying to locate the exact spot after the chapel on the site was demolished.

Mr Delahaye paid tribute to the Irish-born soldiers who he said had contributed to the liberation of France in 1918. He sang La Marseillaise at the site in tribute to them.

A piper’s lament and the Last Post were sounded after the unveiling.

On Saturday morning at 5.50am the Royal Munster Fusiliers held a service at the spot where the Munsters went over the top during the Battle of Aubers Ridge. The Munsters were one of the few British regiments to reach the German trenches but were driven back. More than 150 men were killed and the Munsters suffered some 379 casualties in total.

The Munsters front line is marked by a cinder track which remains there to this day as does the evidence of the battle. Visitors to the battlefield were still picking up detritus from the battle 100 years on.

Both the Munsters and the Suffolk Regiment, whose front lines were on the others side of the Cinder Track, held a joint service there on Friday afternoon.

The last general absolution was also remembered on Friday at Glasnevin Cemetery when extracts from Fr Gleeson’s diary detailing the event and the subsequent battle were read out. The diaries have gone on display in Glasnevin.

Glasnevin Trust chairman John Green described the Last General Absolution painting as “one of the iconic paintings of the first World War”.

He also described Fr Gleeson as a man of extraordinary bravery and compassionate who ministered to men of all faiths. Fr Gleeson is buried in Glasnevin Cemetery.