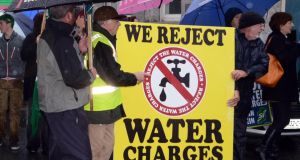 Up to 20,000 people braved driving wind and rain to take to the streets of Cork as part of the national campaign against water charges organised by the Right2Water.

The protest began when campaigners started to assemble outside the library on the Grand Parade at around 1.30pm with the group moving down the South Mall at 2pm.

The protest, stewarded by anti-water charge campaigners wearing blue berets, took 40 minutes to pass the junction with Parliament Street on the South Mall.

The protest followed a traditional route through the city centre – down the South Mall to Parnell Place, up Merchant’s Quay, down Patrick Street and back to the Grand Parade.

By the time the last of the protesters, Ballyhea Says No to Bondholders, passed the Parliament Street junction, the lead group were on Patrick Street over a kilometre away.

The huge column of demonstrators brought Cork city centre to a halt. Veteran activist Noel Murphy of the Communist Party of Ireland estimated the crowd was 30,000 strong while Socialist Party councillor Mick Barry put it at more than 20,000.

“It’s the biggest protest I can recall in Cork since the days of the PAYE march in the city in 1979 – people have turned out in their thousands here today,” said Mr Murphy.

Gardaí – who said the march passed off without incident and was good humoured – estimated the crowd to be between17,000 and 20,000 strong.

The protest was led by a group of Cork hurling fans including Cyril ‘Sombrero’ Kavanagh and Pat ’The Piper’ Hurley, followed by residents of Ashbrook Heights in Togher

“We were the first not to pay but we won’t be the last,” proclaimed the Ashbrook Height banner as they led groups from Mahon, Mayfield, Ballyvolane and elsewhere in the city.

Groups from Passage West, Carrigaline, Cobh, Glanmire, Charleville and Bantry were among the many protesters from around the county who descended on the city.

Among the marchers were several trade unions including OPATSI, CWU and some Cork City Council members of SIPTU despite the union not supporting the protest.

Political parties also participated with a large Sinn Féin contingent prominent, along with the Socialist Party, the Workers Party, People Before Profit, the Communist Party of Irleand and the People’s Convention.

“You can shove your water meter up your arse,” sang the crowd to the air of traditional Africa American folk song She’ll be Coming around the Mountain when she Comes.

Other chants included “Enda Kenny, Not a Penny” and “Here Comes Joan, Hide Your Phone” in reference to Joan Burton’s comment about protestors having top of the range smart phones.

“From the Rivers to the Sea, Irish Water is free,” chorused the crowd before breaking to an adaption of Jackie’s Army: “ Ole, Ole, Ole – No way we can’t pay”.

Among the group banners was one with a specific Cork slant, proclaiming “From the Lee to the Sea - it’s for you and me - Keep your greedy hands off Irish Water - Uisce Saor”.

At the rally in Grand Parade after the march, John Lonergan of the Ballyphehane Anti-Water Charge Group, said the people of Cork had sent a clear message to the government.

“In April this year, a certain Mr Hogan went on Prime Time and said a handful of protestors in a small estate in Cork would not change a thing. Well, Mr Hogan take a look at us now”

To tumultuous cheering, Mr Lonergan then introduced Suzanne O’Flynn from Ashbrook Heighs in Togher, the first estate in the country to stop the installation of water meters.

“I would ask everyone to get up and follow what we did and stop this government and Irish Water Ltd from taking any more - we cannot pay and will not be screwed anymore,” she said.

Gardaí estimated about 500 protesters turned out for a march in Bandon while protests in Clonakilty, Fermoy, Mallow and Youghal each attracted crowds of about 400.