Employers to deduct property tax from wages this month 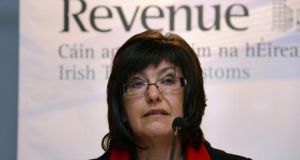 Josephine Feehily, head of the Revenue Commissioners, which has sent instructions to employers to deduct charges from wages. Photograph: Cyril Byrne

Employers have started cutting the salaries of tens of thousands of employees who haven’t paid their property tax or household charge following instructions from the Revenue Commissioners.

In recent weeks the Revenue sent more than 100,000 “mandatory notifications” to employers and pension providers to begin deducting the pay of liable individuals at source over the rest of the year.

These deductions – which will show up in people’s salaries or pensions from this month onwards – will be substantial in some cases, as many have a liability for both the property tax and household charge.

The household charge – a predecessor to the property tax – was initially €100. But with tax and interest added, those liable face paying at least €215.

The average property tax liability for this year was €315 and half that amount last year, as the property tax applied for six months only. Anyone who hasn’t paid faces interest charges at a rate of 0.02 per cent per day.

Revenue’s instructions to employers or pension providers direct them to reduce the amount through the PAYE system or other methods over the remainder of the year. Employees with liabilities were then given five days to pay or show Revenue they did not have any arrears.

Anyone who paid up during this time was able to cancel the deduction, while property owner who pay up over the coming weeks or months will be provided with credit for any payment.

Similarly, property owners who paid tax under self-assessment but did not include the property tax or household charge are being targeted.

The Revenue said demand letters for outstanding liabilities are being referred to sheriffs and solicitors for collection, or will be the subject of attachment orders unless payment is received immediately.

A further 7,300 people reliant on social welfare have received a deferral on the grounds that their only source of income is from the Department of Social Protection.

The greater-than-anticipated numbers paying property-related taxes and charges has yielded more than €300 million for the exchequer. The figures are good news for the Government, which also announced yesterday that tax revenue for the first seven months of the year is now half a billion euro ahead of target.

The stronger-than-expected performance is likely to give Minister for Finance Michael Noonan greater scope for tax breaks.

The figures show total tax revenue stood at more than €22 billion at the end of July, a 6.4 per cent increase on the same period last year. This is €548 million or 2.5 per cent ahead of target.