James Conway, an Irishman living and working in the UK, has posted an anti-government video to his Facebook page that received over half a million views in less than one day. Video: James Conway 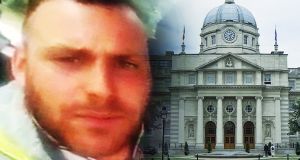 A screengrab taken from a video posted by James Conway which has been seen by almost 600,000 people in which he criticises the Government’s decision to challenge the Apple tax ruling.

A video posted online by an Irish construction worker in the UK, criticising the Government’s approach to the EU Apple tax ruling, has received more than 500,000 views.

In the video, James Conway urges the Government to take the €13 billion windfall from the ruling and use it to build infrastructure and create jobs.

“Because when people are working they’re spending money in the country. How much is Apple spending? Damn all,” Mr Conway says.

Mr Conway said he made the video because it “drove me absolutely off the walls” when he read about the Government’s decision to appeal the Apple tax ruling.

By 9.30am on Thursday the video, titled “A little message from myself to the Irish Government”, had attracted 588,000 views and Mr Conway had received more than 700 messages from around the world.

“The reaction has been very positive,” he said. “I think it’s probably a reflection of how a lot of people in Ireland and a lot of Irish people around the world are feeling…they feel at a loss.

The 23-year-old from Ballymote, Co Sligo, said he first travelled to the UK for work three years ago. “I left school when I was about 17 or 18 and worked in Wexford; I’ve worked in Offaly, around Dublin, Birmingham, Manchester, Liverpool. I’m in Wrexham at the moment, we’re based out north Wales.”

“I come home now every second weekend. I get home on a Friday afternoon and I get my child on Friday, Saturday and Sunday and I’m back on Monday morning then.

“I’ve worked at home and it doesn’t pay. It’s alright if you can subsidise yourself in a way that you can live of very, very little. That’s my major problem. They’re not making work pay at the moment.”

He said he hopes to return to Ireland but that currently there are not many opportunities in the construction sector. He said while the Government focuses on the “knowledge economy” ordinary workers are being left behind.

“The ideal for me would be to see some fund to be put in place to improve the infrastructure in the west of Ireland, the northwest of Ireland and the rural areas of Ireland-because there’s any amount of work that can be done.

“They can improve the roads, they can bring fibre broadband out to rural areas to spread the actual recovery so that rural areas and places outside of Dublin actually see something from this recovery.”