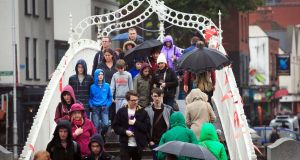 Rain or no rain: Dublin is up there as one of the hottest destinations and experiences for the year ahead...say Lonely Planet. Photograph: Gareth Chaney Collins

An increasingly cosmopolitan vibe and the centenary of 1916 have formed an unlikely alliance to make Dublin one of the world’s must-visit cities for the year ahead, according to a global player in the guidebook market.

The city has found itself in third place in the Lonely Planet’s Best in Travel 2016 top 10 just behind Quito in Ecuador and Kotor in Montenegro, which took the number one slot.

The destinations featured in the Lonely Planet’s travel annual – a self-styled “highly anticipated collection of the world’s hottest trends, destinations and experiences for the year ahead” – are frequently off the beaten track or not as well travelled as hugely popular destinations such as Paris or New York City.

Cities tend to feature because of major events taking place or due to recent development leading to “a lot of buzz” about the location.

With around €22-million set aside for planning the 2016 celebrations marking the centenary of the 1916 Easter Rising, the book said next year would be “a particularly good time” to visit.

In addition to the 1916 commerations, it also says the “diaspora has turned inside out and Dublin is now a truly cosmopolitan capital, with an influx of people, energy and ideas infusing the ever-beguiling, multi-layered city with fresh flavours and kaleidoscopic colours,” the book gushes.

It says Dublin has a huge amount to offer any traveller. “Meet the perfect stranger through the Little Museum’s brilliant City of a Thousand Welcome’s initiative, where an ordinary Dubliner will tell you about their home town over a free drink in a local pub.

“Follow the Independence Trail around key sites where nation-forming events took place…Plunge into the Irish Sea at the Forty Foot in Sandycove, or nurse a deep dark pint fireside in Mulligan’s on Poolbeg St, where the atmosphere is as potent as the stout.”

Lonely Planet spokeswoman Noirin Hegarty, who is no stranger to the city having been the editor of the SundayTribune before it closed, said Dublin “should be on every traveller’s must-see list. It’s pulsing with vibrancy, optimism and creativity.

“The city is truly buoyant; whilst also boasting inner green spaces and wild outdoor arenas along the coast. 2016 really is the time to go.”

Tourism minister Paschal Donohoe said the news was “fantastic” and suggested thast it would “propel Dublin even further by encouraging a greater number of visitors to pay us a visit.

Also welcoming the news, was Niall Gibbons, the chief executive of Tourism Ireland. “The inclusion of Dublin at number three in the world... is wonderful news and will surely help to inspire travellers everywhere to put Dublin and the island of Ireland on their holiday wish-list for 2016. It is another well-deserved accolade for Dublin, which provides Tourism Ireland with a great hook to continue to promote the city and Ireland around the world as ‘must visit’ destinations.”