Dermot Healy laid to rest in Sligo amid music, dance and poetry

Writer laid to rest yesterday in the company of poets and artists, musicians and singers, a president and, above all, his neighbours 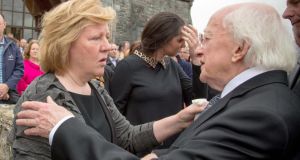 As Fr Michael Donnelly told the congregation at St Patrick’s Church Maugherow, Co Sligo, Dermot Healy knew the value of neighbours. “It is in the neighbour’s house, the fiction begins,” he had written and for two days the neighbours had waked him at his home in Loughaun, Ballyconnell.

Yesterday they brought him from his home on the edge of the Atlantic, where fellow writers stood alongside President Michael D Higgins, as they comforted Healy’s widow Helen and his children Dallan and Inor.

“The shovels work like oars rowing the dead man from this world to the next,” he wrote and in Carrigans Cemetery all was quiet yesterday as they rowed him home.

There were jigs and reels during Mass and they carried him from the church to the strains of The Parting Glass. It seemed everyone had a story about a kindness he had done. Healy once said when he looked at the landscape of north Sligo it had little impact but when he wrote it haunted him. Yesterday his spirit seemed to fill the place.