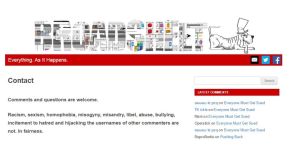 The broadsheet.ie website has received a legal letter from solicitors for Denis O’Brien after reprinting a piece removed from a satire website on Thursday following contact from the businessman’s legal representatives.

The broadsheet.ie website has received a legal letter from solicitors for Denis O’Brien after it republished a piece removed from a satirical website on Thursday following contact from the businessman’s legal representatives.

The article, initially published on Waterford Whispers News, focused on the awarding of the State’s second mobile phone licence to Mr O’Brien and the findings of the Moriarty tribunal in relation to his dealings with then minister for communications Michael Lowry.

It was accompanied by a digitally altered image of Mr O’Brien, and the piece was apparently set in a parallel universe.

Following the removal of the article from the Waterford Whispers News website on Thursday, broadsheet.ie republished the piece.

On Friday evening, broadsheet.ie published a letter it said was received from Mr O’Brien’s representatives, Meagher Solicitors, which stated that “you have chosen to republish a Waterford Whispers News article that is grossly defamatory of our client”.

It continued: “This was a calculated and malicious decision to compound the damage to his good name and reputation.

“We call upon you to immediately remove this article from your website, Facebook, Twitter and all other social media platforms. If you fail to do so then we have instructions to take all necessary steps to protect our client’s rights.”

“Accordingly your client has not been defamed and there are no grounds to remove the article,” it said.

A request for comment was made to Mr O’Brien’s spokesman, but a response had not been received at the time of publication.

Speaking to Today FM, which is owned by Mr O’Brien’s Communicorp Group, Ms Shortall called for the State’s defamation laws to be updated after a series of legal manoeuvres by the businessman.

Mr O’Brien is currently suing the Oireachtas Committee on Procedure and Privileges, accusing it of interfering with the courts and breaching his Constitutional rights.

He took the action after the committee ruled that Independent TD Catherine Murphy and Sinn Féin TD Pearse Doherty did not abuse Dáil privilege when they made claims about his banking arrangements with the IBRC in the Dáil chamber.