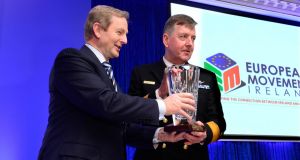 The award was presented at a ceremony on Monday in Dublin’s Shelbourne Hotel by Taoiseach Enda Kenny, who is honorary president of the Movement.

“The Defence Forces have a proud history of international service for Ireland and on behalf of the European Union and the United Nations, ” he said. “They are a very worthy recipient, especially this year, when, as well as their ongoing humanitarian and peace-keeping endeavours abroad, they have played a very prominent and important role in our 1916 Centenary commemorations.”

For the past two years, the Naval Service has been involved in Operation Pontus, supporting the Italian Marine Rescue Co-Ordination Centre which has been overseeing a multi-lateral effort at rescuing migrants crossing the Mediterranean Sea from north Africa.

Since May 2015, Defence Forces ships rescued over 15,000 would-be migrants attempting to cross the sea.

At EU level, the Defence Forces participate in what is known as the EU Battle Groups. This is a commitment by the military in some EU Member States to have at the ready a level of personnel and equipment to assist in humanitarian missions at short notice.

There are 18 such groups and, apart from Ireland, the Nordic Battle Group included Sweden (which is also neutral), Finalnd, Norway, Estonia, Latvia and Lithuania. The Group is headquartered in Sweden to where a number of Defence Force staff officers have been seconded.

The Defence Force also participates in the North Atlantic Treaty Organisation-led partnership for peace, a 22-member organisation which aims to increase trust between Nato and non-Nato nations. Defence Force personnel are seconded to Nato headquarters.

The Defence Forces’ main overseas commitments are with the United Nations. At present, these include the former Spanish Sahara, the Democratic Republic of Congo, Mali, Afghanistan, Bosnia and Kosovo.

However, by far the largest and most consistent overseas commitments are in the Middle East, in south Lebanon and Israeli-occupied Golan in western Syria. As part of these missions, Defence Force personnel are also based in Jerusalem and at UN headquarters in New York.

“Since 1958, the Defence Forces have had a continuous presence on peace support operations. Currently there are personnel deployed on 15 missions in 14 countries worldwide,” said Chairman of European Movement Ireland, Maurice Pratt, paying tribute to Óglaigh na hÉireann, the official title in Irish of the Defence Force.

“The Irish Defence Forces have stepped up to the mark in the international arena and have made the entire nation of Ireland proud, making them a very commendable deserving winner of the 2016 European Movement Ireland European of the Year award.”

Accepting the award on behalf of the men and women of the Defence Forces, Vice-Admiral Mark Mellett, Chief of Staff of Óglaigh Na hÉireann, said it was “an honour”.

“This is a special tribute that endorses the considerable efforts and sacrifices our personnel make in order to fulfil the roles we have been assigned, not only in the international arena, but also domestically and particularly during this year of centenary commemoration.

“It is testament to the outstanding service of our soldiers, sailors and aircrew who seek to inspire pride and lead excellence in the performance of their duties, at home and abroad, on land, sea and air.”