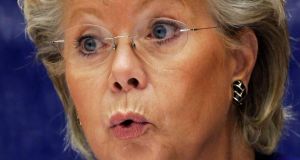 EU citizens who are arrested or accused of a crime have the right to interpretation in their own language in all courts in the union after a new directive came into force last week.

The deadline for EU member states to implement the law – the union’s first on rights of suspects in criminal procedures – passed last week. The new right applies throughout criminal proceedings, including when receiving legal advice.

“This can be an historic moment for justice in Europe: the first ever law on fair-trial rights for citizens will become a concrete reality if member states live up to their legal obligations,” said Viviane Reding, the EU’s Justice Commissioner.

She added that the Commission would “not shy away from naming and shaming” states that did not implement the new directive, which she said went to the heart of citizens’ rights.

The directive guarantees the right of EU citizens to be interviewed, to take part in hearings and to receive legal advice in their own language during any part of a criminal proceeding, in all courts in the union. It was introduced in order to ensure full compliance with the standards provided by the European Convention on Human Rights and the case law of the European Court of Human Rights in Strasbourg, as well as with the Charter of Fundamental Rights. Translation and interpretation costs will have to be met by the member state, not by the suspect.

In a statement announcing the passing of the implementation deadline, the Commission said that without minimum standards to ensure fair proceedings, judicial authorities would be reluctant to send someone to face trial in another country. As a result, EU measures to fight crime, such as the European arrest warrant, would not be fully applied.

It said the right to translation and interpretation was the first in a series of fair trial measures to set common EU standards in criminal cases. The law was followed by a second directive on the right to information in criminal proceedings, adopted in 2012, and the right to access to a lawyer, adopted earlier this year.

Meanwhile, the Law Society has urged the Government to move quickly to establish the new Court of Appeal without “stinting on resources”. The new court will sit between the High Court and the Supreme Court, and is aimed at reducing delays at the latter court.

The path was cleared for the new institution to be set up when the proposal was comfortably passed with a majority of 65 per cent in a referendum last month.

Referring to the referendum outcome, Law Society director general Ken Murphy said: “There is nothing for which the Government has a stronger, clearer, more direct mandate from the people of Ireland than this. It must proceed immediately to put in place a Court of Appeal as a new and necessary piece of infrastructure in our justice system.” Mr Murphy said this should happen without delay “and without stinting on the resources necessary to make it effective”.

Minister for Justice Alan Shatter, who led the campaign for a Yes vote in the referendum, has said he hopes the new court will begin hearing appeals next autumn.

It is expected that 10 new judges will be appointed to the court, which will hear both civil and criminal appeals and leave the Supreme Court free to focus on cases of major significance. It will cost an estimated €2.5-€3 million per year, according to the Department of Justice.

The salary and other conditions for judges in the new court have not yet been announced, but pay is expected to be set between that of a High Court judge (€172,710) and a member of the Supreme Court (€182,895).

Traumatised woman must remain a ward of court 17:47
Young homeless mother may have been dead in tent for a number of days 17:41
Man jailed for five years for killing 7ft 5in Belarusian man 17:00
Boy not screened for hip problem at birth settles action for €120,000 16:21
Second-level teachers vote for industrial action over school safety and pay 16:10