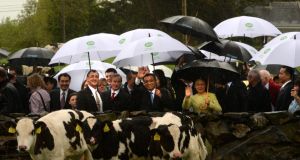 Chinese premier Li Keqiang and Taoiseach Enda Kenny have signed two new memoranda of understanding during a visit by a high-level Chinese delegation in the west of Ireland.

Mr Li, who is China’s second-in-command, led bilateral discussions with Mr Kenny at Ashford Castle, Co Mayo, and visited a beef and dairy farm outside Headford on the Galway-Mayo border.

Speaking through an interpreter, Mr Li said he viewed Ireland as a gateway to Europe and the western economy, and said he was happy to have improved links between the two countries.

It is anticipated that the visit could help to expedite resumption of Irish beef exports to China, at a time when it has become Ireland’s second most important market after the EU for agri-food exports.

Ireland is the first European country to have gained access to China since the 15-year-old BSE-related ban on importing European beef was lifted in February.

Mr Li and his wife, Prof Cheng Hong, were accompanied by a number of cabinet ministers when they landed at Shannon airport yesterday en route to Brazil. President Michael D Higgins had invited the Chinese premier to Ireland during his State visit to China last year.

The highly choreographed visit amid tight security began with a trip to a 109-hectare farm in Co Mayo.

The farm, run by three generations of the Garvey family, is predominantly dairy, with a large herd of Holstein/Friesian cattle.

In torrential rain, the Chinese premier and his wife and delegation were afforded a quick viewing of the dairy herd and suckler calves, along with the family’s ducks, before attending a performance of Irish music by the Trad on the Prom group from Galway.

Mr Li and his wife were then invited into the Garvey’s kitchen for tea, along with Mr Kenny and his wife, Fionnuala O’Kelly, and Mr Coveney, where they discussed Bord Bia’s Origin Green sustainability system.

Bord Bia hosted a presentation of “artistan food” in conjunction with Cafe Rua of Castlebar, Co Mayo, in a marquee erected on the Garvey farm.

Access by the press was limited to photographers however, amid some concerns within the Government delegation about the “sensitivity” of the trade dimension to the visit.The Chinese delegation leave today to continue their trip to Brazil.