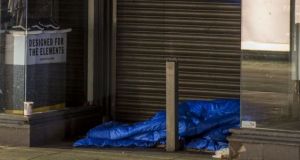 A four point plan to immediately address the housing and homeless crisis has been proposed by the Simon Communities.

The charity has also called for a cross-party initiative ahead of the housing and homeless forum being held in Dublin on Thursday.

Minister for Environment Alan Kelly is opening the discussions as the latest figures show homelessness is increasing.

Almost 3,500 homeless adults used emergency accommodation in Dublin at the end of last year, the highest number in any three-month period since the figures were first compiled nine years ago.

The figures, in an end-of-year report from the Dublin Region Homeless Executive (DRHE), show 5,480 adults used homeless accommodation during 2015, a 10 per cent increase on 2014.

The report is among several documents to be circulated today at a “homelessness forum”.

There will be discussion about the steps needed to be taken by an incoming minister with responsibility for housing.

Niamh Randall, national spokesperson for the Simon Communities, said there was an urgent need for a cross party and multi department response to the crisis.

The four point plan proposes an increase in rent supplement, more security for tenants in the private rental sector and measures to ensure people can stay in their homes.

The plan also includes a proposal for the State to encourage financial institutions to sign up to the best practice agreement drawn up by the Private Rental Tenancies Board (PTRB).

“We owe it to the 6,000 people in emergency accommodation to act immediately,” Ms Randall said on RTÉ’s Morning Ireland.

“We cannot sit back and wait while a Government is formed. That could take three weeks, six weeks, or nine weeks. Action is needed now. These issues need to be addressed immediately.”

Ms Randall said empty and void properties should be put back into use as quickly as possible.

She said the departments of finance, public expenditure, social reform, social protection all needed to work closely for the crisis to end.

“The Government and members of the opposition all need to work in collaboration to support measures to ensure the crisis is halted,” she said.

Ms Randall called for rents to be linked with the Consumer Price Index and an immediate increase in rent certainty.

“Rents have gone up 32.3 per cent since 2012 while at the same time there is diminishing stock. We need to find measures to create greater stability,” she said.

“It is extremely frustrating from our point of view. There are increasing numbers of people seeking help.”

Ms Randall called on the Government to convene a group of people who have the skills and knowledge to address the issue.

“Nothing should be off the table,” she said.

She said the pace of response over the past few months was just too slow.