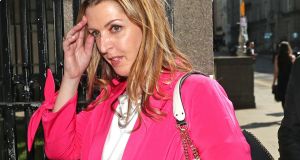 Vicky Phelan: sued the HSE and the lab for missing her cancer in a 2011 smear test. She was diagnosed with cancer in 2014. Photograph: Brian Lawless/PA

Emails released by the department show officials sought confirmations from senior figures in the national cancer control programme and screening service about the Limerick woman’s case.

The records show department officials wanting assurances from senior HSE officials that they were not concerned there might be patient safety issues in the CervicalCheck programme arising from the mother of two’s case against the HSE and a US lab over an incorrect smear test.

The emails were sent days before Minister for Health Simon Harris was told by his officials in a briefing note last month that they did not consider her case to be “a patient safety incident but rather a reflection of the known limitations of the current screening test”.

Mr Harris received the briefing note on April 16th – just over a week before Ms Phelan settled with the US lab Clinical Pathology Laboratories for €2.5 million, an event that led to a HSE investigation and the disclosure that 209 women with cancer received incorrect smear test results and 162 of those women were not told about them.

Ms Phelan sued the HSE and the lab for missing her cancer in a 2011 smear test. She was diagnosed with cancer in 2014 and only learned that a 2014 clinical audit conducted after her diagnosis found the 2011 smear test, which originally showed no abnormalities, to be incorrect.

The newly released emails show correspondence going back and forth between the department and HSE officials on April 11th that led to the drafting of that ministerial briefing note five days later in preparation for potential publicity that might emerge as a result of the court case.

That afternoon, the head of the HSE’s national screening service, Charles O’Hanlon, emailed department official Sinead Donohue after speaking with her by phone to confirm, in an answer to her earlier query, that the service and Dr Jerome Coffey, the head of the national cancer control programme, maintained its view that it did not identify the Phelan case as a “patient safety incident”.

The service considered that it was “part of the known limitations of the current screening test (ie a false negative)”, wrote Mr O’Hanlon.

“However, the consideration of the audit in this case is subject to a forthcoming legal process, including the meaning of the word ‘miss’,” he added.

Michael Conroy, a principal officer in the department’s cancer unit who was copied on Mr O’Hanlon’s email, sought assurances himself from Dr Coffey in an email sent two hours later.

“Can you please confirm that it is your view that this is not a patient safety issue,” he wrote to Dr Coffey, after referring to a discussion they had earlier that morning and directing the doctor to look at Mr O’Hanlon’s email, which he forwarded to him.

Dr Coffey later replied: “Yes, I am satisfied that this case does not indicate a patient safety issue. It primarily reflects the nature of the screening test and the existing continuous audit process.”

Since the controversy broke, Damien McCallion, the HSE director for emergency care, has taken over control of the screening service from Mr O’Hanlon.

The Minister and senior department officials have said they did not know about patients not being informed until the settlement in Ms Phelan’s case.