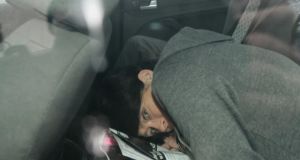 Sabrina Cummins (lying down) from Ringsend Park, Dublin pictured arriving at the Courts of Criminal Justice where she and her brother were charged with the murder of 63-year-old Thomas Horan in Ringsend. Photograph Paddy Cummins

A brother and sister made no reply today when they were charged with the murder of 63-year-old Thomas Horan, who was found dead in his sheltered accommodation apartment in Dublin on Monday.

The body of Mr Horan, who is believed to have originally come from Mullingar, Co Westmeath, was found at his home at Cambridge Court, a housing complex in Irishtown, where he had been living for about four years.

At 4 am on Monday gardaí received an emergency call following the discovery of his body in the bedroom of his ground floor flat.

A doctor pronounced him dead at the scene and the area was immediately sealed off for a technical examination. A full postmortem carried out on Wednesday by the State Pathologist Dr Marie Cassidy revealed that Mr Horan had died from internal injuries, and a murder investigation was launched.

Today, brother and sister Kenneth (27) and Sabrina Cummins (36), both with addresses at Ringsend Park in Dublin 4, appeared in court charged with murdering the 63-year-old man at his home on Monday.

Gardaí had detained them under Section 4 of the Criminal Justice Act 1984 at Donnybrook and Irishtown Garda stations before they were brought before Dublin District Court today.

The district court cannot grant bail in a murder case and the pair, who have not yet indicated how they will plead, were remanded in custody to appear again next Thursday. Any bail application will have to be brought to the High Court.

Dressed in a light grey hooded jacket and tracksuit bottoms, black T-shirt and shoes, Mr Cummins sat silently with his legs crossed during his short hearing.

Det Garda Bryan Hunt told Judge Michael Walsh that the 27-year-old had been arrested on Wednesday at the Old Cabra Road in Dublin 7, after which he was taken to Irishtown Garda station.

Det Garda Hunt said Kenneth Cummins was charged on Thursday evening and after caution “made no reply”.

The court heard that he is unemployed and defence solicitor Michael Hennessy had two applications. The first was for legal aid for his client, which the judge granted. The second was for the court to direct the prison authorities to give him necessary medical attention in custody, which the judge ordered.

His sister, who was wearing a dark grey hoodie, black top and black skirt, was then brought into the courtroom. Det Garda David Wogan said that she was also arrested on Wednesday afternoon in the Cabra Cross area on Dublin’s northside.

She remained seated with her hands on her lap and did not speak during the hearing, in which Judge Walsh heard she made no reply when charged.

Her solicitor Michael French asked for Ms Cummins receive “immediate medical attention” in custody and for free legal aid to be granted to the woman. He said he and a colleague had been in regular contact with Ms Cummins and “the seriousness of the situation is not lost on her”.

Judge Walsh agreed to direct that the woman would get medical attention during her remand in prison, and granted her legal aid.