Appeal for witnesses after woman (80) dies in Monaghan crash 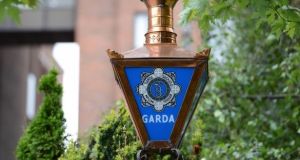 Gardaí in Ballybay Co Monaghan are appealing for witnesses after an 80-year-old woman died in a crash on the R188 Monaghan to Cootehill road at Stranooden.

Gardaí in Ballybay, Co Monaghan, are appealing for witnesses after an 80-year-old woman died in a crash on the R188 Monaghan to Cootehill road at Stranooden.

The incident happened at about 5.30pm on Saturday when two cars collided.

The 80-year-old woman, a passenger in one of the cars, was taken by ambulance to Cavan General Hospital where she was later pronounced dead.

She was part of a group of five travelling in the car at the time of the collision. The driver of the car, a woman in her 40s, and a second passenger, a man in his 90s, were also removed from the scene to Cavan General Hospital with minor injuries. The two other passengers in the car did not require hospital treatment.

The driver of the second car, a woman in her 70s, was also taken to Cavan General Hospital where her injuries are not thought to be life threatening. She was the sole occupant of the car.

Garda forensic collision investigators were expected to examine the scene on Sunday morning.

The coroner has been notified of the incident.