Marks indicate finds may have been used in ‘ritual ceremony’ 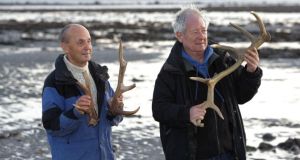 Pictured near the site with some of the red deer antlers from 500 AD which were found on the outskirts of Galway city are Brian O Carra, author of the paper on the site (left) and geologist, Prof Mike Williams. Photograph: Joe O’Shaughnessy.

Red deer antlers and horse bones dating back 1,500 years from north Galway Bay could have formed part of a ritual ceremony.

The antlers, skulls, jaws and bones of the animals were located by Brian O’Carra and Mike Williams on an inter-tidal zone west of Galway city.

Cut marks on bones indicate that they were consumed for subsistence or ritually sacrificed, at a time when Christianity was already taking hold in Ireland, Prof Williams says.

Eating horses would have been forbidden because of “pagan” connotations, which makes the evidence even more intriguing, he says.

Radiocarbon dating of one antler has estimated its age range as being between 430 AD and 548 AD.

However, “significant environmental changes” may have occurred as recently as 1,500 years ago, they suggest, having examined the area where the antlers and bones were embedded.

The finds were in black silty mud containing shells.

This “palaeoenvironment of still water conditions” contrasts strongly with the current character of the area as a “high energy” coastal environment, they state in a paper with fellow authors Brian Mercer and Bill Wood for the Irish Naturalists’ Journal.

They say it is not possible to determine if such changes were linked to changes in sea levels. The location is currently normally well covered at full tide.

Only one species of red deer roamed in Ireland at that time, as the fallow deer dates from about 1200 AD.

Red deer were important in medieval society, Prof Williams and Mr O’Carra note, and monasteries used them to “establish an identity” for themselves as being beyond royal control.

They believe the antlers they found came from young, sexually mature stags. Red deer tend to drop their antlers each year around March and April, after the rutting season.

The horse bones matched a small young horse and an older horse or pony.

Both the National Museum of Ireland and the Office of Public Works have been notified, and Prof Williams and Mr O’Carra advise that the site requires “organised archaeological excavation”.