Anthony Foley tribute kicks off Ireland’s defeat of All Blacks

‘We wanted to give something back to him and the family’, says player of No 8 tribute 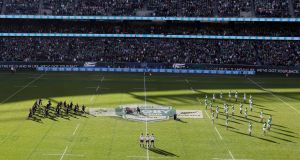 In a match laden with great moments, one of the greatest arising from Ireland’s defeat of New Zealand was the Irish team’s tribute to former Munster head coach Anthony Foley.

As the southern visitors lined up to deliver their pre-match Haka, the Irish dropped into a formation of their own to form a number eight.

Foley served his province and country well, wearing the No 8 jersey. The team’s decision, taken in the days before the match to line up as a sign of their respect, was every bit as powerful as the loudest and most determined of Hakas.

Foley’s family was moved by the gesture, contacting Foley’s fan base via the Axel Foley Memorial Page on Facebook to express their appreciation.

“To say that we were touched by how Ireland faced the New Zealand Haka, drawing inspiration from the No 8, would be an understatement,” the family posted.

“Ironically, 15 years ago Anthony played for Ireland against and lost to New Zealand on a score of . . . 40-29. Last night’s Irish response to the Haka was incredible remembrance.”

The post goes on to state: “Today is our second #8masses4no8 Sunday and we’ll be remembering Anthony and all who have gone before us by lighting our candle.

“We will also dedicate it as thanks to Anthony’s former colleagues for this special moment, for his life and for the lives of all others who have gone before us, and to all for their support.”

The page was set up by Foley’s son, 11-year-old Tony, after he returned home from the Munster Glasgow Warriors game, where the players and fans united in remembering the Munster legend. The #8masses4no8 campaign encourages people to go to Mass and pray for deceased family and friends and Tony’s own Dad if they so wish.

The players decided to form the eight during the week, said wing forward CJ Stander. It was particularly emotional for fellow Munster players, he said.

“Same as the Glasgow match: We wanted to give something back to him and the family. He meant a lot to me and was really the rock in my rugby development these last four years. Showed me what he learned over the years. He pushed me to the next level.

“I just think of what man he was, the legend he was,” Stander said. “What he gave to me as a rugby player. In that 60th minute, when I got tired, I was just thinking: why am I playing this match? Who got me here. Everything he gave to me. That was massive for me.”