8.8m tonnes of plastic debris dumped in oceans every year

About a third of plastic dumped in sea comes from China, survey shows 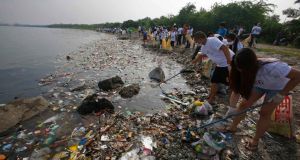 Between 15 per cent and 40 per cent of dumped plastic enters the ocean each year, according to a survey in the journal ‘Science’. Photograph: Erik De Castro/Reuters

Nearly nine million tonnes of plastic is dumped into the world’s oceans every year – much more than previously thought – and about one-third of it comes from China, a new study has shown.

The survey in the journal Science found that between four million and 12 million tonnes of plastic washed offshore worldwide in 2010.

This amounts to between 1.5 per cent and 4.5 per cent of the world’s total plastic production – enough to spoil every foot of coastline on the planet with five shopping bags of plastic debris, including bottles, wrappers, bags and toys.

Between 15 per cent and 40 per cent of dumped plastic enters the ocean each year.

The study’s lead author, Jenna Jambeck, an environmental engineering professor at the University of Georgia, said 8.8 million tonnes was the middle range of the estimate: “I think this is a wake-up call for how much waste we produce,”she said.

More worrying is that scientists don’t know where more than 99 per cent of the plastic is. Images of floating islands of debris on the ocean’s surface are shocking, but researchers have only been able to track down 245,000 tons on the surface. Much more could be on the ocean floor, in the Arctic ice or anywhere else in the ocean.

Plastic really only started to figure in consumption patterns in the 1960s, but human use of plastic for consumer goods has increased exponentially.

China is the biggest marine polluter in the world with 2.4 million tonnes – about 28 per cent of the total – while five Asian countries (China, Indonesia, Philippines, Vietnam and Sri Lanka) account for half of plastic waste in the oceans.

China overtook the European Union as the world’s largest producer of plastic in 2010.

Dr Jambeck projects that by 2025 the total accumulated plastic waste in the oceans will reach about 170 million tonnes, going by population trends.

“We’re being overwhelmed by our waste,” she told Science Daily. “But our framework allows us to also examine mitigation strategies like improving global solid waste management and reducing plastic in the waste stream. Potential solutions will need to co-ordinate local and global efforts.”

The only industrialised western country on the list of top 20 plastic polluters is the US, in 20th place.

The last study was carried out in 1975 by the US National Academy of Sciences, which reckoned about 0.1 per cent of plastic flowed out to sea, but by using World Bank data on the waste streams of 192 countries, Dr Jambeck was able to work out how much waste was generated and the percentage that reaches the oceans.

“For the first time, we’re estimating the amount of plastic that enters the oceans in a given year,” said the study’s co-author Kara Lavender Law, a research professor at the Massachusetts-based Sea Education Association.