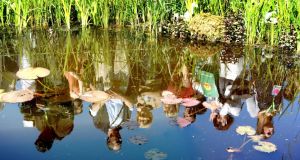 Visitors to Bloom in the Phoenix Park, Dublin, yesterday reflected in the pond of one of the show gardens. Photograph: David Sleator 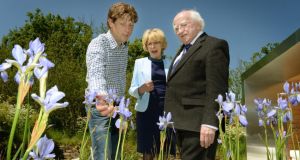 President Michael D Higgins and his wife, Sabina, speak to Gerard Mullen in his overall winning garden, Venture into the Wild, at Bloom in the Phoenix Park, Dublin, yesterday. Photograph: David Sleator 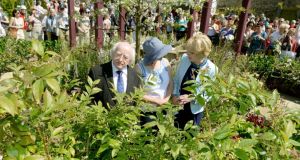 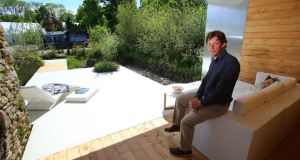 Gerard Mullen, winner of a gold medal and Best in Show award for his garden Venture into the Wild, at Bloom in the Phoenix Park, Dublin, yesterday. Photograph: David Sleator

President Michael D Higgins was in his element when he opened the Bloom gardening festival in the Phoenix Park in Dublin today. No flower was safe from his perusal, no gardenia escaped his gaze.

He visited show gardens, threw horseshoes, met tango dancers and came eye to eye with a scarecrow in the Wizard of Oz Sanctuary garden. “Bloom is real,” he enthused. “Bloom is about earth and soil and elements and water,” he continued, sounding like he was about to break into a poem.

But breaking out was also on his mind. Breaking out of Áras an Uachtaráin, to be specific. Waxing lyrical about the gardeners he met at Bloom, he said they were the kind of people he’d like to spend an evening with. “And if I was myself ever to break out over the wall from the Áras, I would be looking for those kind of people,” he said, causing his security detail to shuffle nervously nearby.

He was in confessional mode today and had another admission to make. Observing that Bloom was a gathering of people who liked to look at gardens he told the crowd: “ Let you be honest with yourself, some of you much prefer to look at them than to actually be hoking away at them in the different seasons. I’m making a public confession on behalf of all so therefore you are now totally absolved.”

There was a relaxed holiday mood at the 70-acre site as the hot sunshine melted ice-cream cones and picnics popped up on every free patch of grass. Bord Bia chief executive Aidan Cotter said people were queuing to get in from early morning.

“This is a very good crowd for the first day,” he said. “It’s looking good for the weekend.”

Some 80,000 attended last year despite a very wet Sunday, so organisers are hoping they might attract close to 100,000 before the festival ends on Monday. As well as cookery demonstrations, entertainment, a floral marquee and retail area, they will have several dozen gardens to see, including Gerard Mullen’s Waterford Harvest garden. It won the best in show prize for its lush wetland wild habitat theme.

There was a riot of colour at Bloom, and that was just Michael Carey’s floral tie, matching socks and vibrant trousers. “I think they’re a wild salmon colour,” the Bord Bia chairman said, delighted to get in a mention of Irish food.

“I’m sure there’s a protocol about wearing trousers like this.”

But if there was, the President’s protocol people were too busy to notice as they tried to marshall Mr Higgins and his wife, Sabina, through the site at a reasonable pace. They were stymied at every turn. Outstretched hands kept appearing in front of the couple and long-lost friends appeared out of the shrubbery to greet President and Mrs Higgins. One woman was worried about the effect of the sun on the presidential pate. “He should have a cap on, he’ll get sunburned,” she clucked.

But Mr Higgins was oblivious as he made a beeline for the Federation of Beekeepers, causing his minders to smile wryly and check their watches once more.

1 Q&A: How close are we to having a Covid-19 vaccine?
2 Bobby Storey: The IRA's planner and enforcer who stayed in the shadows
3 Unflappable ‘Dr Tony’ became public face of Covid-19 crisis response
4 Ireland’s official coronavirus death toll likely to have been overstated, report finds
5 Gardaí to start checking pubs to ensure Covid-19 guidelines being followed
Real news has value SUBSCRIBE

Coronavirus cases in US continue to surge ahead of Fourth of July 20:25
Séamus Power rockets into share of clubhouse lead in Detroit 20:03
European stocks pause as coronavirus worries offset rebound hopes 20:00
Teenager arrested after allegedly driving over 210km/h during Garda chase 19:55
England lifts quarantine for 59 countries but plan criticised as ‘shambolic’ 19:32