WHO director general warns of rise in chronic diseases 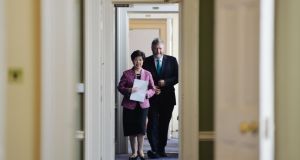 Ireland’s achievements in extending life expectancy and reducing mortality rates could be jeopardised by the rise in chronic diseases, the director general of the World Health Organisation, Margaret Chan, has warned.

“You cannot afford not to take action” on the health challenges Ireland faces, Dr Chan told the inaugural meeting of the Healthy Ireland Council in Dublin. These included the rising level of chronic diseases such as cancer, heart disease and diabetes, harmful health behaviours and health inequalities in the population. The life expectancy for Irish men has reached 78.6 years, up four years in a decade and two full years above the EU average. Women live four years longer and their expectancy is also above average for the EU. However, two-thirds of Irish adults are obese or overweight.

Dr Chan said that in wealthy countries the true health impact of chronic diseases could be masked by good treatment, by for example reductions in blood pressure or cholesterol. However, obesity, a highly visible signifier of “big trouble” on the way, could not be masked. No country will be able to treat its way out of the “cancer crisis”.

Without healthy human capital, economic development was not possible, she said, praising the Government’s Healthy Ireland strategy for its “whole-of-government” approach.

She warned that excess consumption of high-sugar, high-energy foods could jeopardise the improvements in Irish life expectancy over the past decade.

The President, Michael D Higgins, has agreed to be the patron of the council. Healthy Ireland is a Government initiative aimed at promoting and improving the health and wellbeing of the population over the coming generations.

Minister for Health James Reilly described the setting up of the council as a “watershed moment” for health promotion and promised it would not be a “talking shop”.

Though it was considered “sexier” to open a new hospital wing or CT scanner than to launch a public health initiative, every euro spent on prevention saved €12 to €20 on treatment later, he pointed out.

Irish people had a history of not going to the doctor unless they were “blue in the face or their arm was half cut off”, he said, but that had to change.

The Healthy Ireland framework, which was launched in March 2013, aims to increase the proportion of people who are healthy, reduce health inequalities, protect the public from threats to health and create a health-friendly environment.