Teens and young adults urged to get meningitis vaccine

In this interview from 2013, Daráine Mulvihill talks about losing her legs to meningococcal septicaemia and how this has affected her life. Video: Meningitis Research Foundation 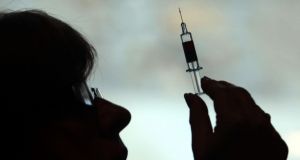 A nurse prepares a syringe, as students are being urged to get vaccinated against meningitis. File photograph: David Cheskin/PA Wire

Irish teenagers and young adults have been encouraged to get vaccinated against meningitis, following a significant rise in the number of cases of the disease in the last year.

Teenagers and young adults are the second most at-risk group from the meningitis virus, which is more commonly seen as a risk for babies, according to the Meningitis Research Foundation.

“The incidence of meningococcal disease amongst the 15-24 year age group rose from 10 cases in 2014 to 16 cases in 2015, according to the provisional statistics from the HPSC (Health Protection Surveillance Centre Ireland),” said Caroline O’Connor, the foundation’s medical information officer in Ireland.

From December 2016, babies born on or after October 1st will be routinely offered a vaccine against meningitis B (MenB), but there is no plan to offer the medicine to older children or young adults.

“Our focus at the moment is on babies and young children and there are no plans to extend the MenB vaccine to young adults for the foreseeable future,” the Department of Health told The Irish Times.

One-in-four young adults, compared with one-in-10 in the general population, carry the bacteria which causes the disease - which is spread by close contact, including kissing, the sharing of cigarettes and drinking glasses and living in close quarters in student accommodation.

“As a result, it is vital that young adults are able to recognise the signs of the disease, particularly as it can often mimic a hangover or flu,” Ms O’Connor told The Irish Times.

In the UK students are offered a vaccine to prevent meningitis W.

There has not been a noticeable increase of this type of meningitis in Ireland as yet.

However, meningitis B rates are on the rise and the country does not have a vaccination plan in place, Ms O’Connor warned.

Parents who want to protect their teenagers from this potentially fatal illness will have to pay for the vaccination privately - at €130 to €180 per dose.

This fee does not include the cost of administering the injection.

In the absence of the vaccine, people must be vigilant, said Ms O’Connor.

“It is vital that students are able to recognise the signs of meningitis and know when to seek medical help, particularly as they may be living away from home for the first time.”

Though there is no national meningitis B vaccination plan, students are offered one against meningitis C (MenC) in the first year of secondary school.

All students should have had a MenC vaccine before going to college.

Ms O’Connor said: “There are on average 150-200 cases of bacterial meningitis in Ireland every year and MenB accounts for approximately 50 per cent of these cases.

“On average, one-in-10 people who contract meningitis and septicaemia will die.”

Gemma O’Connor (37), from Co Kerry, developed meningococcal meningitis when she was 16.

Within 24 hours, she went from thinking she had a tummy bug to her family being told she could have less than an hour to live. Today, she worries about her two children.

“I was feeling unwell and went to bed thinking I had a vomiting bug as I was throwing up and felt really tired.

“The following morning, my mother told me to stay off school as I still wasn’t well, but when my older sister looked in on me, I was in even worse shape - I had a pain in my neck and all my limbs felt really heavy.

“She knew there was something wrong so she took me to our local doctor. My mum noticed a few red spots and knocked on the doctors’ door to say I needed to be seen immediately.

“I was given a shot of penicillin and taken to hospital.

“I was pumped full of antibiotics - initially things didn’t look too bad as I was feeling slightly better and my lumbar puncture results came back clear.

“My parents were told to go home and get some rest but at around 1am, they got a call telling them to get to the hospital immediately and round up the family - the doctor told them I had between 10 minutes and an hour to live.

“My organs had also begun to fail but thankfully the medication started to work and I survived the night.

“I spent around two weeks in hospital and the doctors said being so fit from playing basketball had aided my recovery - as had the quick thinking of my GP.

“I have two little boys of my own now and I really believe people need to be aware of how dangerous meningitis can be.

“We all know how it can affect babies, but teenagers are in just as much risk and the speed in which it takes hold is terrifying.”