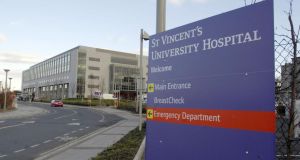 The chief executive of St Vincent’s Hospital Group, Nicholas Jermyn, is receiving total remuneration of close to €300,000, it has been revealed.

In a letter to Health Service Executive director general Tony O’Brien yesterday the hospital group said Mr Jermyn was receiving a public salary of €136,282 in addition to a privately funded payment of €136,951 and a privately sourced car allowance of €19,796. St Vincent’s Hospital Group said his total remuneration package was €292,669.

The figures suggest that, based on information in the public domain, Mr Jermyn is the State’s highest-paid health service administrator. Mr O’Brien receives just under €185,000 a year.

Criticism
St Vincent’s Hospital Group had come under strong criticism from members of the Dáil Public Accounts Committee (PAC) for refusing up to now to provide full details of payments made to executives.

PAC chairman John McGuinness said last night he was shocked by the scale of the payments and the fact the hospital had released the details hours before Christmas Eve.

He said it was clear in the wake of the revelations regarding St Vincent’s and the Central Remedial Clinic the committee would have to pursue the matter of remuneration in the section 38 agencies relentlessly to get the full picture.

Private income
The hospital group’s letter said the group was in a position to fund the remuneration as it had a source of private income from the operation of the nearby St Vincent’s Private Hospital.

It forms part of the group along with the public St Vincent’s University Hospital and St Michael’s Hospital in Dún Laoghaire. The letter said the remuneration had been approved by the hospital group’s board and was regularly reviewed against performance and benchmarked externally.

The HSE said last night its director general had sought a meeting with the chairman of the hospital group on January 6th “with a view to discussing how the hospital can move towards compliance [with public pay policy]”.