Road safety: ‘At the end of the day, it is the cyclists who will come off worst’

Greater safety on Irish roads would save more lives, improve health through more walking and cycling, and even boosts tourism, says the boss of the RSA 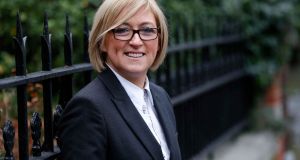 Local authorities are being urged to introduce a 30km speed limit in the Republic’s towns and cities and around schools. As well as protecting pedestrians and children, such a move would also have a spin-off benefit of boosting tourism, according to the Road Safety Association.

“If you are hit by a vehicle travelling at 30km per hour, you have a 9 in 10 chance of surviving,” says chief executive Moyagh Murdock. “However, if you are hit at 50km per hour, the chances of survival are 50/50, and at 60 km per hour this falls to one in ten.”

The general speed limit in built-up areas is currently 50km per hour, but local authorities can reduce it further in areas it deems appropriate. “Thirty kilometres per hour should be the default position,” Murdock says, “and if you want this increased, you should have to ask for it.”

She says it has worked in many other towns and cities. For example 80 per cent of the streets of Edinburgh are now zoned 30km per hour, or 20 miles per hour (the campaign in Britain is called “Twenty is plenty”). Switzerland has made progress on limiting speed, as has France. Paris is expected to have introduced a 30km limit in its city streets by 2020.

The RSA chief says the benefits are manifold: many parents are reluctant to let their children to play outdoors or take bikes out, because of the increased volumes of traffic and the sense that it is not safe, “whereas if speed limits in urban areas were reduced, this would help allay this fear”.

She argues that tourism could also benefit as people would be more inclined to come on cycling and walking tours.

Murdock says Ireland has been slower to move towards reducing limits. “There is a fear of negative reaction [and] we have been very slow to get out of the car – whether it’s because its in our DNA or it rains so much, I don’t know!”

Even economically, lower speed limits make sense, she says, referencing a PWC report that put a fatal road collision’s total cost to the community at €2.7million.This is in terms of loss of earnings, cost to the family and community of the bereaved person, medical costs, Garda and emergency services, inquest and other costs.

There are many examples of cycle lanes that disappear suddenly into the ether. “If you can’t put in a full cycle lane, then you should allow for wider margins along the road.”

She says better margin space along roads makes it safer not just for cyclists, but also for walkers. Walking is another past-time that has grown in popularity, particularly in rural areas, where space is often not allowed for pedestrians.

Does Murdock think helmets and hi-viz gear should be mandatory for cyclists? “Certainly, hi-viz gear reduces the risk of a collision and cycling helmets can help reduce injuries at lower speeds,” she says.

RSA figures show about half of all cyclists wear helmets – “a figure which is still too low,” she says.

While many wear cycling gear, it never ceases to amaze Murdock that much of it is not reflective. “Some of it is very edgy and fashionable and it is colourful,” she adds, “but it is not all reflective in poor lighting conditions.”

The bike-to-work scheme has played a huge role in bringing more cyclists on to the roads. It involves generous tax breaks up to €1,000 to buy a bike and cycling equipment, and is administered through an employee’s workplace.

“There is an opportunity here to provide some sort of incentive to get cycling safety gear,” Murdock says. “Perhaps the employee should have to bring in the safety gear – helmet and hi-viz helmet – before the employer signs off on the scheme.”

In fact, the RSA gives away “voluminous” amounts of hi-viz vests. Last year, it donated more than €1 million worth of safety clobber to to cycling clubs and schools.

While some fear that making helmets and hi-viz gear mandatory could discourage people from cycling, she says, “at the very least, it should be mandatory for children to wear helmets. Education is the key”.

The number of fatal cycling incidents has fallen in recent years, but like others, the RSA believes one fatality is one too many. And the tension between motorists and cyclists never goes away. There are many examples of incidents where motorists have reacted with a rage that Murdock says “can be scary” and of cyclists who likewise demonstrate bad behaviour.

“We need to get people to respect one another’s space on the road,” she says. “At the end of the day, it is the cyclists who will come off worst.”

A recent RSA survey suggests that many people are afraid to cycle because they believe there is a substantial risk of being injured. A Wexford cyclist, Phil Skelton, is campaigning for regulations making it mandatory for motorists to leave a 1.5m gap between themselves and a cyclist when overtaking.

The RSA supports the campaign, but is awaiting results from a two-year pilot programme in Queensland Australia before it presses the Government to make it law.

Technology, both in-vehicle and elsewhere, including speed apps and additional aids for HGV drivers to help protect against serious cycling incidents, are supported by the RSA.

Murdock says the organisation can play a very important role in safety and reducing death and serious injury. But in the end it comes down to education, awareness, and most of all, personal responsibility.

“We can’t have a garda operating on every corner,” she says. “People have to take responsibility for themselves. “