Mental institutions ‘can’t be blamed on the church; it was a State-run project’ 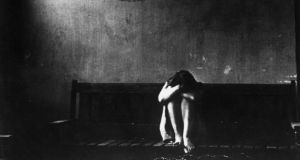 Dr Damien Brennan: “There was a harshness and dehumanising aspect that was very much like the Magdalene laundry”

Medical professionals and local communities protecting their economic interests played a major role in the incarceration of tens of thousands of people in asylums, according to a study into what’s depicted as the forgotten scandal of Ireland’s institutional past.

Its author, Dr Damien Brennan, said there were strong parallels between the operation of Ireland’s mental hospitals and the Magdalene laundries but the former “can’t be blamed on the church; it was a State-run project. We did it as communities, as societies”.

In his book Irish Insanity: 1800-2000, the culmination of 10 years of research launched in Dublin last night, he seeks to explain why Ireland in the 1950s had the world’s highest rate of mental hospital residency.

Dr Brennan, assistant professor at the school of nursing and midwifery, Trinity College Dublin, argues it “had little to do with the mental state of the admitted individuals”. Rather, it was driven by factors such as law, economics and vested interests, including the creation of a medical treatment hierarchy that “continues today”.

“The staff had a stake in this. The medics and nurses had their professional interests in this. Economically, it became very important, and it became a snowballing institutional development,” said Dr Brennan, whose PhD work on the subject informed the late Mary Raftery’s Behind the Walls documentary series.

“These are the largest institutions of confinement in our State, much bigger than all of the others added together. But they haven’t attracted the same scrutiny or critical review as those institutions which worked as church-State partnerships.”


Harsh ‘dehumanising’
Dr Brennan, who worked as a mental health nurse in St Loman’s, Grangegorman and Portrane, said he had no knowledge of physical beatings or sexual abuse in hospitals but “there was a harshness and dehumanising aspect that was very much like the Magdalene laundry”. 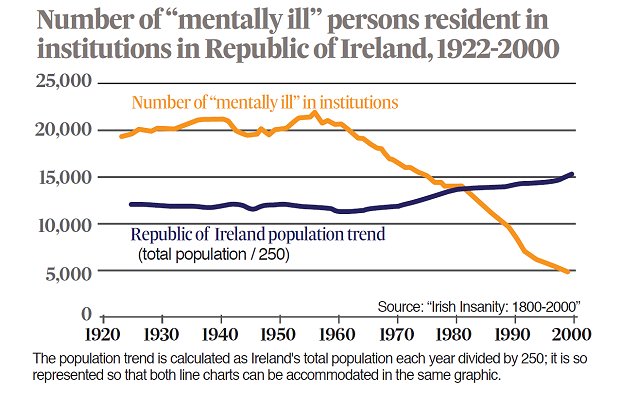 “I think there is a reluctance to take this on,” he continued. “People who spent three months in a laundry are getting redress – and I don’t want to bring it back to money – but why aren’t psychiatric hospitals even of interest post the McAleese report?

“I know patients who spent 30, 40, sometimes 50 years in these places, and we haven’t even conceptualised how they might have been damaged by the institutions.”

He pointed out the McAleese report examined about 10,000 women who went through the laundries, whereas more than double that could be found in asylums on any one night in the 1950s, making this “the biggest story regarding institutional settings” in Irish history.

Dr Brennan noted the “radical” use of mental hospitals had traditionally been blamed on factors ranging from colonialism to the existence of something like a “schizophrenia gene”. But he said there was no evidence the Irish had “a fragile mental state that makes them prone to mental illness”. As for blaming the British, “hospitalisation rates went up, not down, post-independence”.


Control by medics
One definite factor he said was the “medical takeover of hospitals” in the mid-19th century. “Medics gained control of inspections, directors and clinical positions and that maintains today – even post Vision for Change.”

Another factor was the role such institutions played in sustaining local employment. “This was like getting a multinational coming to Ballinasloe.” It only became “politically possible” to close down the asylums in the Celtic Tiger era when other sources of employment were readily available.

He added: “I would be concerned about new markets of diagnosis being opened up, for example, the diagnosis of attention deficit disorder. You find schools will get resources where it is diagnosed, and that’s a poor dynamic. It reminds me of the mental hospital system expanding as a business, on the basis of continued diagnosis.”

He also expressed concern that the current State policy on mental healthcare was written by an expert group comprising two service users, a chairperson and 15 members of professional bodies.

“Vision for Change gave them an opportunity to write their job descriptions in the post-institutional phase.

“The buildings are gone but the system and structures and, in a lot of ways, the power arrangements that were established in psychiatric hospitals still have a major part to play in our mental health service . . . The service user model at the moment is quite tokenistic, and is managed by the professional bodies.”

On the question of resources, he posed the question: “Who is better to intervene around young male suicide? Maybe the GAA might be better placed. The fact that we go to these professional groups, myself included, as the initial point of contact I’m not sure how useful that is.

“We need to imagine a mental health service without the institution as a starting point, or a reference point.”
l Irish Insanity: 1800-2000 is published by Routledge. Last night’s lecture was the first of a series of public talks hosted by Trinity’s school of nursing and midwifery.