Customers to pay subscription charge of €25 to join scheme 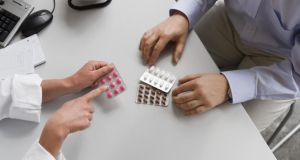 Under its scheme, the Dundrum pharmacy will charge €4.95 for a 28-day supply of Atorvastatin, a generic cholesterol medication, which generally costs more than €10 in pharmacies in the Republic.

A Dublin pharmacy is to sell generic prescription drugs at Northern Ireland prices by introducing a radical business model likely to be closely watched by other pharmacies.

Healthwave, a recently opened Dundrum pharmacy, is promising to match cross-Border prices for generic medications. Under its scheme, people availing of the savings will have to join a subscription service with an upfront fee of €25 a year.

A spokesman for the Irish Pharmacy Union, which represents more than 2,000 pharmacies, said it was too early to say if the model would be successful. “Most pharmacists operate in a very high-cost environment with many losing money. It is up to each pharmacy to decide how they do business,” he said.

Healthwave will charge €4.95 for a 28-day supply of Atorvastatin, a generic cholesterol medication, which generally costs more than €10 in pharmacies in the Republic. Salbutamol inhalers, which commonly retail for about €10 in pharmacies, will cost €2.95.

“The cost of medication in Ireland has been multiples of those seen in other European countries, most notably across the Border,” said Healthwave pharmacist and chief executive Shane O’Sullivan.

He said the pharmacy is concentrating on generic drugs “because that is where the greatest savings are to be found”.

He said all pharmacies had the right to set their prices for private patients. “There will be a reaction certainly but . . . we are not below-cost selling. We have simply chosen to have a much lower mark-up.”

The scheme is aimed at the private market but could also save the State money. Mr O’Sullivan cited the example of a customer with chronic obstructive pulmonary disease who pays €170 monthly for drugs. They have to pay the first €144, with the Government covering the rest. Under the new system the drugs would cost €100 per month, saving the patient €44 per month and the State €26.