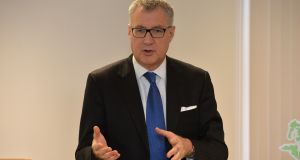 Adding €2 to €3 to the cost of a packet of cigarettes and ring-fencing the revenue for cancer drugs would cover the cost of new treatments, says oncologist Prof John Crown. Photograph: Alan Betson/The Irish Times

Demand for expensive immune system drugs to treat cancers is going to increase because of their effectiveness but costs need to be contained so the widest number of patients benefit, according to oncologist Prof John Crown.

“They are too expensive. The countries of the Western world, where the big markets are, need to get their heads together and develop some kind of cost containment strategy,” said Prof Crown of St Vincent’s University Hospital.

It was “absolutely outrageous” that some cancer drugs in use for many years, which were cheap to make, had suddenly got expensive due to market forces, he told a symposium on cancer research on Friday.

Immunotherapy drugs, in contrast, were expensive to develop and make. Given the range of common diseases where they were effective, their use had “colossal economic health implications” as demand increased.

They were widely used in treating lung cancers, kidney disease, melanomas and many other cancers. The big challenge for oncologists, he added, was working out what patients would benefit from particular drugs.

Adding €2 to €3 to the cost of a packet of cigarettes and ring-fencing the revenue for cancer drugs would cover the cost of new treatments, he said.

The other revolution in cancer treatment, Prof Crown said, was “precision medicine” such as the use of “antibody drug conjugates” which target the cancer cell in a precise way – in contrast to “the blunderbuss of chemotherapy and radiotherapy”.

Dr Denis Collins of the National Institute for Cellular Biology in DCU outlined promising research on developing novel combinations of cancer drugs in fighting cancers resistant to treatment, including triple-negative breast cancer, one of the most aggressive and difficult to treat forms of the disease.

He outlined how checkpoint inhibitor drugs in combination with widely-used breast drug Herceptin could bring better outcomes for those with breast cancer.

For far too long cancer research in a clinical setting was divorced from the laboratory but increasingly they were merging into a single effort which meant new treatments were quicker in development, Prof Crown said. “Translation works both ways, and the experience of how treatments work in people feeds back to inform further laboratory research,” he said.

On cancer risk, he told The Irish Times smoking continues to be “the huge enemy”. The risk factor “that we did not pay sufficient attention to” was weight, notably obesity.

There was also a need to scale up the ability in Ireland to assess familial links to cancer through genetic testing. The National Centre for Medical Genetics attached to Crumlin hospital in Dublin, was doing heroic work in this regard, he said, but greater resources were needed.

The Minister for Health’s decision to re-introduce cancer warnings on alcohol products was correct in his view. On prevention, he said cervical cancer vaccination and avoiding sunburn continue to be critically important.

1 Eyewitness to Auschwitz: ‘We were held in the wagons like animals’
2 Election 2020: 10 key questions to ask candidates on your doorstep
3 Election 2020: Peter Casey to stand in both Donegal and Dublin West
4 Eating out in Dublin – the homeless way
5 Which jobs do teenage girls and boys aspire to have by age 30?
Real news has value SUBSCRIBE