Resurgence of the disease means a better treatment is needed 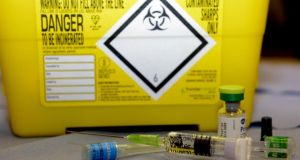 For this reason booster vaccinations are often needed. This fall off in immunity may be contributing to the number of whooping cough cases, which are increasing in Ireland and rising dramatically in the US, Australia and Netherlands, he says. “People perceive whooping cough as a disease of the past but case numbers are increasing.”

The original vaccine was based on using whole pertussis bacteria. While this gave strong long-lasting immunity it also had negative side effects.

To reduce these side effects a new vaccine was developed using only parts of the bacteria, and this is now the main vaccine used. “This is where things went wrong,” Prof Mills says.

The side effects were gone but the vaccine didn’t work as well. “The longevity of the immunity is poor and needs boosters.” The level of immunity is also not as strong as the previous vaccine, he says. Prof Mills decided to improve the vaccine, with funding from Science Foundation Ireland.

The current vaccine uses something called an adjuvant that strengthens the immune response. He tried a different adjuvant, one based on the use of bacterial DNA, and this brought an immediate improvement. Details of the work are published in the current edition of the journal PloS Pathogens .

“We have taken a bit of the bacterial DNA and used this as an adjuvant,” he says. “This works much better than the old adjuvant.”

It has been tested for safety in mice, but because this adjuvant is already in use he believes it could deliver a much better vaccine quickly. “The adjuvant has already been proven to be safe in humans,” he says. The findings “should pave the way for an improved vaccine”, he says.