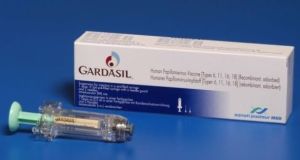 Ireland has been asked by the World Health Organisation (WHO) to participate in a meeting next week over concerns regarding the State’s low uptake of the HPV vaccine.

The meeting in Copenhagen on Monday will also discuss the even lower uptake of the vaccine in Denmark, along with ways of increasing public acceptance of it.

The human papillomavirus virus (HPV) is strongly linked to cervical cancers in women and head and neck cancers in men.

The vaccination knocks out the virus and studies suggest at least 70 per cent of these cancers could be avoided with vaccination.

The HSE’s National Immunisation Office launched a HPV vaccination campaign in 2010, with the initial target group being young girls aged 12 to 13 years. Since then about 220,000 girls have been vaccinated. An initial shot is given followed by a second about six months later.

Vaccination rates peaked at 87 per cent in 2014-15, but rates have fallen since due to negative campaigning by lobby groups who claim the vaccine causes significant side effects, said the head of the immunisation office, Dr Brenda Corcoran.

“It is a really big issue,” she said. “We have preliminary figures that suggest the uptake is low due to the huge impact of lobby groups.”

There was a fall in vaccine numbers of about 5,000 last year compared to the previous year.

The vaccine is proven to reduce cancer incidence and it is “really concerning” that lobby groups were causing doubts despite a lack of hard evidence that their claims are true.

The vaccine is only given with the consent of a child’s parents. “Some schools are being targeted by anti-vaccine groups, and people are getting their information from social media,” Dr Corcoran said.

“They post up videos of young girls in wheelchairs that are extraordinarily emotive. These go viral and are being passed around.”

The WHO has monitored the world HPV vaccination programme for more than 10 years as has the European Medicines Agency. These bodies have seen only the expected small number of adverse effects, Dr Corcoran said.

“Why is this happening? I don’t know. They had a good programme running in Denmark but then they had a [TV] programme with these girls and the vaccine uptake went down to 25 per cent,” Dr Corcoran said.

The virus is sexually transmitted and up to 80 per cent of women carry the virus, something that puts them at higher risk of developing cervical cancer. “Many of them acquire it in their teenage years. We need to give the vaccine before infection,” Dr Corcoran said.

The real issue in relation to the vaccine is its ability to reduce the numbers of cancers in women but also men. The link between HPV and cervical cancer was established in the 1980s, a discovery that won Harold zur Hausen the Nobel Prize for Medicine in 2008.

The HSE provides a dedicated website where people can find information about HPV and the vaccine at hpv.ie