Health insurers being ‘fraudulently’ charged by hospitals for private patients

Consultant claims insurers regularly billed up to €1,000 a night for private patients left on trolleys 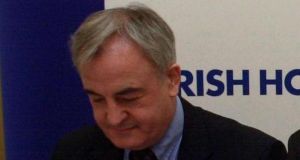 Health insurer VHI insisted today that it took reports of inappropriate billing by hospitals “extremely seriously” and had established a special investigations unit to identify the extent of the practice.

This follows claims by a senior consultant that health insurance companies were being “fraudulently” charged up to €1,000 a night by hospitals for private patients who were left sitting on trolleys or chairs in emergency departments.

Professor Michael O’Keefe, consultant ophthalmologist at the Mater Hospital in Dublin, said patients were coming into hospitals with private health insurance but getting nothing in return for the high premiums they were paying.

“All these people are being charged these huge figures for zero service. It’s an absolute scandal. I hate to use the word but it’s fraudulent,” he told RTÉ’s Today with Pat Kenny programme.

“I’ve seen it first-hand - a young woman in the middle of the ward with two young men on either side and an older man opposite her and she being charged between € 800 and € 1,000 a night, paid for by the VHI.”

“On top of that there’s the € 80 public service charge that applies to all patients going into public hospitals. For that, she gets nothing, a communal toilet, no different food, no different anything.”

Prof O’Keefe, a former VHI board member, said public system administrators were also retrospectively charging insurers for patient care in order to fill holes in their own administration’s finances.

“The only thing that works in this health system at the moment is the private healthcare system. The rest of it is broken down and badly so.”

He said average people were no longer able to afford health insurance rates which were being inflated by inappropriate billing.

“We’re now going to make sure guards, nurses, teachers, a lot of people will not be able to afford these premia. They’ve gone through the roof.”

He said proposed legislation to charge health insurers for the use of public beds by private patients would make matters even worse. Prof O’Keefe said the 8,000 jobs in the private healthcare system were being put at risk to prop up the public healthcare system. He also criticised insurance companies for failing to police hospitals overcharging for services.

On the same programme, VHI chief executive John O’Dwyer said the insurer had contacted thousands of customers to ensure they were in private wards and were receiving the appropriate care while in hospital.

In a statement, the company said its special investigations unit had recovered €6.9 million stemming from inappropriate billing last year. “If it is the case, as has been reported by a senior consultant, that VHI Healthcare has been charged for customers who are in an emergency department, on a trolley or a chair, then this charge is inappropriate and should not have been billed by the hospital in question.”

“If a patient has not been admitted, and is still on a trolley in an emergency department, then the private charge of up to € 1,000 a day should not be levied. If the patient is subsequently admitted to a private, designated bed, then the charge is applicable.”

“Currently there is no charge for a private patient who occupies a public bed,” it said. The company advised customers to contact them if they thought that there was a mistake on their statement or if VHI Healthcare had been charged for accommodation or treatments not received.