E-cigarettes as good as patches for quitting, research shows 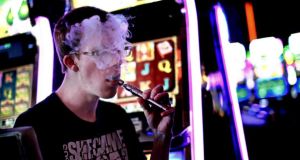 A casino patron exhales vapour from an e-cigarette in Las Vegas. A study carried out by the internationally regarded Cochrane Library has found a third of long-term smokers were able to cut their cigarette consumption in half by using e-cigarettes. Photograph: Sandy Huffaker/New York Times

Electronic cigarettes are as effective as nicotine patches in helping smokers to quit the habit, according to international research.

The study, carried out by the internationally regarded Cochrane Library, found a third of long-term smokers were able to cut their cigarette consumption in half by using e-cigarettes.

The review investigated the findings of randomised trials, where some smokers were given e-cigarettes containing nicotine while others were given ones which did not contain nicotine.

Those who consumed nicotine were twice as likely to stay off tobacco, the study found.

“There is absolutely no doubt that if you give people nicotine it helps them to quit smoking. The question is how big the effect is,” said Prof Peter Hayek of Queen Mary University, London.

The review said that while some users complained of mouth and throat irritation, e-cigarettes are certainly safe for “short- to mid-term use” – though longer-lasting studies will need to be undertaken in years to come.

“So there is opposition to them from a number of quarters,” he told a London press conference.

The devices, which arrived on the market a decade ago, release a nicotine-containing vapour without burning tobacco.

Today, the habit – which now generates €3 billion of sales annually – is known as “vaping”.

Their popularity is growing rapidly. Just one in 12 smokers said they had tried them four years ago, but this jumped to more than half this year. One-fifth of tobacco smokers in the UK are now using e-cigarettes regularly.

Recent estimates suggest 2.1 million people now use them in the UK, compared with 700,000 two years ago.

Nearly one in 10 of the smokers who took up e-cigarettes and who were monitored by the study were still off tobacco a year later, compared with just 4 per cent of those who had been given e-cigarettes that did not contain nicotine.

Illustrating the difficulties faced by those trying to quit tobacco, she said more than half of smokers failed to stay off cigarettes for more than a week, while fewer than 5 per cent managed to do so for a year unless they were given support.

A European Union directive due to come into force in May 2016 will regulate the size, quality and safety of e-cigarettes containing up to 20mg/ml of nicotine, along with the advertising and consumer warning rules that should govern them.

Questioned about their safety, Prof Hayek said some e-cigarette products had been shown to contain a low level of toxins, but not at dangerous levels. “We are comparing them to something that ultimately kills one in two users,” he told The Irish Times.

The jury is still out on whether e-cigarettes act as a gateway for non-smokers to take up tobacco.

British statistics report that the number of “never-smokers” who had tried them rose from 0.5 per cent in 2012 to 1.1 per cent this year, though the number of those smoking regularly thereafter is still very small.