Research in Sligo schools shows general misconception about the harmful effects of the sun, sunbeds and tanning 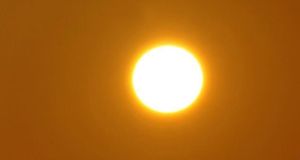 One of the encouraging results was that 78 per cent said the sun makes skin wrinkly, with vanity rather than fear of cancer more likely to encourage safe sun behaviour.

Nine out of 10 teenagers have been sunburned – and the majority think that tanned skin is more attractive and looks healthier, a new study shows.

Almost one in five 15-17 year olds also believe sunbeds are a remedy for acne. Another misconception highlighted in the research was that 73 per cent of young people believe sunbeds create a safe base for a holiday tan.


Skin cancer
The survey was carried out among 243 transition-year students at five Co Sligo post-primary schools on their attitudes to skin cancer, sunbed use and tanning. Some teenagers said they experienced blurred vision and burned skin after using sunbeds.

Researcher Selene Daly, a clinical nurse specialist in dermatology at Sligo Regional Hospital, said that while the long-awaited ban on sunbeds for under 18s will be welcome, a nationwide sun awareness campaign is crucial.

Less than half (48 per cent) of the respondents use sun screen regularly. The majority of those who do use protection use only factor 15.

The study found 77 per cent of teenagers think tanned skin looks healthier. And 73 per cent believe it looks attractive.

One of the encouraging results was that 78 per cent said the sun makes skin wrinkly, with vanity rather than fear of cancer more likely to encourage safe sun behaviour. “We find that teenagers think that they will never get cancer,” explained Ms Daly.

The Irish Cancer Society has warned that using a sunbed before 30 increases the risk of melanoma by 75 per cent. “We discovered that 19 per cent think that sunbeds can cure acne, which is an absolute myth – in fact it could make it worse,” said Ms Daly.

The survey found low sunbed use among participants but researchers believe this was more to do with access in a predominantly rural community. “Only 4 per cent admitted to having used sunbeds but the true figure may be higher, and it was significant that another 14 per cent said they would consider using them,” Ms Daly said.


Sunbeds and teens
One participant said she had used a sunbed at home. “In my view, letting a child use a sunbed amounts to child abuse,” said the specialist.

Ms Daly says education is the key to making people “sun smart” and, while the under-18 ban will give the correct message, it is only one step: “How will it be policed?”

It has been estimated that 140,000 people in Ireland use sunbeds. There are 8,000 new cases of skin cancer each year.